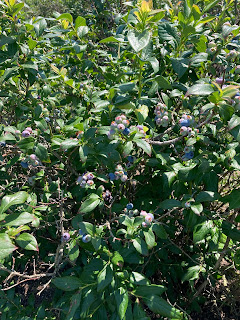 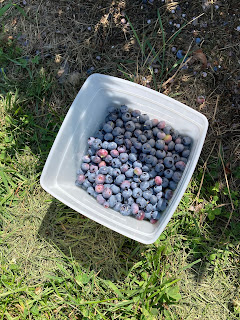 July is blueberry time!  I was able to go blueberry picking with my daughter-in-law.  It had been many years since I had picked berries.  I kept thinking of the picture book Blueberries For Sal by Robert McCloskey.  When little Sal is dropping the berries into her pail they go "kuplink, kuplank, kuplunk".  Mine didn't make that sound because I didn't have a tin pail and thankfully there were no bears to be seen.  It was early in the season so there were still plenty of berries that were not yet ripe.  The ripe ones were delicious.  We ate some straight up, I froze some and made blueberry muffins.
Our weather has been very hot and humid which is surprising because it is so dry.  The meteorologists tell me that is because the humidity is in the air, but hasn't reached the ground.  Go figure!
I read 11 books in July.  Here's the breakdown:
Historical fiction: 1
Mystery/Cozy Mystery: 3
Suspense: 1
Contemporary Fiction: 2
Non-fiction: 3
Classic: 1
Historical Fiction:

Wonderland Creek by Lynn Austin - Alice Ripley's perfect life changes abruptly and she has no idea what to do.  She has been collecting book donations for a library in Kentucky and decides to hand deliver them.  She is unprepared for the poverty that greets her there.  She stays a while to help out and ends up riding the trails delivering books for the library.  A great story with great characters.
Mystery/Cozy Mystery:

Murder on Gramercy Park (Gaslight Mystery #3) by Victoria Thompson - Detective Sergeant Frank Malloy is called to a residence on Gramercy Park to deal with an apparent suicide.  The deceased's wife is quite upset and quite pregnant.  Frank calls his friend and midwife Sarah Brandt to assist with the wife.  It is soon clear that this was no suicide, but rather, a murder.  Frank and Sarah work together to catch the killer.  A great addition to the series.

Death in Bloom (Flower House Mystery #1) by Jess Dylan - Sierra Ravenswood has been working at the Flower House.  While working there she has been learning the art of flower arranging from her boss.  She is surprised when her boss leaves town and puts her in charge of the next flower arranging workshop.  She is even more surprised when one of the attendees drops dead near the snack table.  This was a well-paced story with interesting characters and few twists to keep me guessing.  And it definitely wins for the prettiest cover!

Bruno, Chief of Police (Bruno, Chief of Police #1) by Martin Walker - Bruno is chief of police for the small town of St. Denis in the south of France.  Not much happens in St. Denis and that is how Bruno prefers it.  When the grandfather of a member of the town is murdered, it causes quite a disruption in town.  The man lived up in the mountains and kept to himself.  Because of the circumstances of the murder, Bruno must work with the National Police.  His quiet life quickly becomes less quiet.  But he still finds time to enjoy his home in the country, play tennis and enjoy good food with friends.  This was a good mystery, but my favorite part was the countryside of France and the delicious descriptions of the food.  Oh, and did I mention Bruno was a great guy as well.
Suspense:

Night Fall (Quantico Files #1) by Nancy Mehl - Someone is killing people and leaving them in train cars.  Along with the bodies, he leaves notes that appear to be quotes from a book with chapter and verse.  FBI Behavior Analysts Alex Donovan and Logan Hart are called in to work the case.  As soon as Alex sees the quotes she recognizes them.  She was raised by an Aunt who was part of a cult that followed the teachings of what was called "The Book".  Alex's aunt constantly read quotes to her.  Alex hoped to never have to think about that book or those quotes again.  But now her expertise can help catch a killer.  Nancy Mehl is a favorite author of mine and had that not been the case, I probably wouldn't have finished this one. She is a Christian author and that perspective added to the story, but it was creepy!  I'm glad I stuck with it.
Contemporary Fiction:

Eleanor Oliphant is Completely Fine by Gail Honeyman - Eleanor goes to work everyday, pays her rent on time, eats the same thing for dinner everyday, she is completely fine.  But, she spends every weekend completely alone.  By Monday morning she is starved for human contact.  When a co-worker strikes up a conversation with her, she is surprised how much she enjoys it.  As the two become friends, Eleanor finds something that was missing in her life and ultimately that friendship saves her life.  I really liked this one.  It sounds depressing and there are difficult situations in the book, but ultimately I found it to be a very hopeful read.

The Invisible Husband of Frick Island by Colleen Oakley - Piper Parrish's happy life is shattered when her husband goes missing at sea.  She is devastated.  Soon, she begins coping by pretending that her husband is still with her.  She has conversations with him in public, she walks him to the docks in the morning and the people of the town love her so much that they go along with it.  Reporter Anders Caldwell is sent to the island to cover the annual cake-walk.  When he is there he meets Piper, but when he discovers what is going on, he becomes determined to find out why nobody says anything to Piper.  However, he has some secrets of his own which could jeopardize his growing relationship with Piper.  This was an enjoyable read.
Nonfiction:

Keep it Shut by Karen Ehman - The author explores what to say, how to say it and when it is better to say nothing at all.  She examines what the Bible has to say about our words and also includes examples from her own life.  The book was very thorough and served as a good reminder.

The Cloister Walk by Kathleen Norris - The author spent time in a monastery while becoming a Benedictine oblate.  This book relates some of her experiences along with reflections on monastic life, and the liturgy of the church.  A fascinating read. 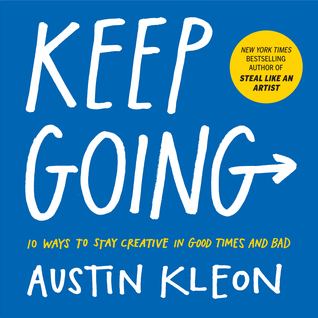 Keep Going by Austin Kleon -  Motivation to stay creative in ten different ways.  This was written specifically with artists in mind, but all of us are creators.  We plan menus, decorate rooms, organize fundraisers or closets.  We need creativity for all of those things and sometimes we just don't have it.   I found lots of good reminders in this book.  Review coming soon.
Classic:

The Death of Ivan Ilych by Leo Tolstoy -  Ivan Ilyich was a good person living a decent life.  When he becomes ill after an accident and begins to see that he will not recover, he has a chance to examine his life and the choices he made. I was struck by how Tolstoy was able to get to the heart of the human condition.  A short, but powerful work.
Well, that is all for me.  I hope you all had a July filled with good books!
~ Gretchen

I am linking up with The Monthly Wrap-Up Round-Up hosted by Nicole @ Feed Your Fiction Addiction and Shannon @ It Starts at Midnight.
at July 31, 2021