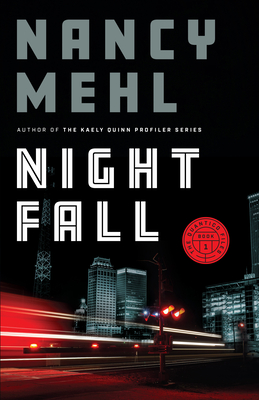 First Lines of Prologue: "His mother sat in the chair next to his bed, reading from The Book. He was almost twelve now, and she'd been reading it to him ever since  he was a little kid.  Adam hated it.  It scared him."

Summary:  FBI Behavioral Analysts, Alex Donovan and Logan Hart are called in to work a case in Kansas City.  There is a serial killer on the loose, who is leaving his victims in train cars along with what appears to be quotes from a book with a chapter and verse.  As soon as Agent Donovan sees the quotes, she recognizes them.  She lived with an aunt for several years who believed in The Book.  Her aunt constantly quoted The Book to her.  Alex left her aunt's house planning never to return there or think about The Book again.  But now, the FBI needs her expertise to help them catch this serial killer before he carries out a plan outlined in the book to eliminate one third of the population.

My thoughts:  Nancy Mehl does suspense well.  I have read several books she has written.  However, this one was a bit out of my comfort zone.  In fact, I probably would not have finished it if I was not familiar with the author.  This one was very creepy dealing with a dark and very evil serial killer.

The author does a great job of building suspense and creating characters that are interesting and full of depth.  Agent Alex Donovan had a very difficult upbringing and the reader is made aware of this bit by bit.  She has overcome her share of difficulties and has made it to the position of Supervisory Special Agent in the FBI.  She works as a Behavioral Analyst.  Her difficult upbringing has given her the ability to see things that other agents don't.

Logan Hart has heard about Agent Donovan's abilities and is looking forward to working with her. His character was a bit more shallow.   We know that he is well-liked and is often called "The Preacher" because of his spiritual beliefs.

The followers of The Book were a fairly small group so I found it a bit unlikely that of all the people assigned to this case, Alex would have been raised by someone who was a part of that group.  Once I put that aside, it did make for a good story.  It was a race against time as the agents tried to solve the killer's puzzle and stop him before he carried out his plan.

Nancy Mehl's books are sometimes considered "romantic suspense", but what I appreciate about her books is that the romance is way in the back seat.  In fact, in this story, it doesn't move beyond the "I think I might like to spend more time with this person" stage.  The focus is definitely on the mystery.

Something else I appreciated was the author's honest portrayal of mental illness.  Alex endured some very difficult things while she was growing up and these caused PTSD.  As she has to revisit things from that difficult time in order to solve this case, she has a hard time keeping her anxiety in check.  Also, instead of just referring to her aunt as crazy or weird, the author points out that she was mentally ill and had deep pain in her life.

This is the first book in a new series and while it was a bit creepy for my taste, the author didn't dive deep into that evil or stay stuck there.  I will most likely give the second book in the series a try when it comes out.