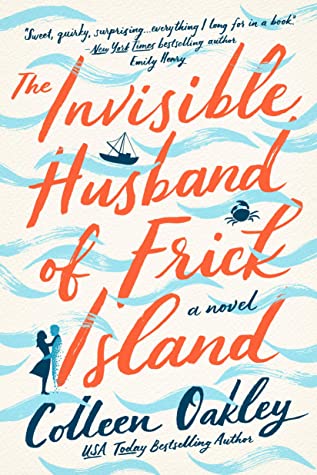 First Line: "At first when Piper scanned the docks and didn't see the familiar rickety white-pine-and-fir fisherman's trawler, she thought nothing of it."

Summary:  Piper Parrish has a near perfect life.  She is married to her best friend, lives on a small island in Chesapeake Bay and is surrounded by people who love her.  When her husband's boat is found after a storm with no trace of him, she is devastated.  She knows that Tom would never leave her, so she copes the only way she knows how.  She imagines that he is with her and goes about her daily life as it was before Tom disappeared.  The townspeople love her so much, and realize that everyone grieves differently, so they go along with the charade.  One day, reporter Anders Caldwell, is sent to the island to cover their annual cake-walk.  While there he befriends Piper and becomes fascinated with the island.  He returns to the island under the cover of doing research for a podcast, and soon befriends many of the residents.  However, Anders is hiding something and when the people of Frick Island discover his secret, they have a hard time forgiving him.

My thoughts:  When I heard about this book some of the things that caught my attention were: quirky characters, an island in Chesapeake Bay, the fascinating premise and several reviewers who said they loved it. I have to admit, I really enjoyed this one.

While the story does include some difficult topics - death, grief, mental illness, inclusion - it never gets heavy. Along with those difficult topics were themes of friendship, found family, love, kindness, and patience with others.  I loved the hopeful thread that wound its way through the entire story.  And the island itself captured my imagination.  Once I started reading the book I found it hard to put down.  I just had to know what happened.  Why did the townspeople go along with Piper's charade?  What was going to happen when they found out about Ander's secret?

While this is not a mystery, it does contain several mystery elements.  Some reviewers have called this a romance.  There is some romance in the story, but it is just a part of the full story.  It is a well-written novel with interesting characters that will steal your heart.  I don't want to give too much away.  The less you know going in the better, I think.

Don't miss the author's note at the end of the book talking about her inspiration for the island.

If you are in the mood for a light-hearted, captivating read, I highly recommend The Invisible Husband of Frick Island.

Email ThisBlogThis!Share to TwitterShare to FacebookShare to Pinterest
Labels: Contemporary, Fiction, read in 2021