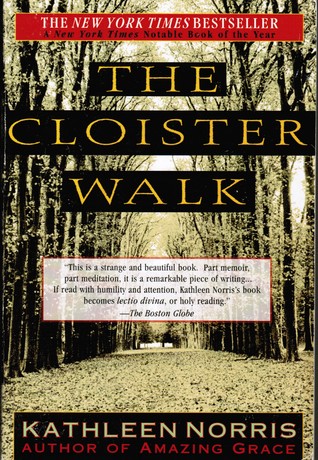 First Lines of Preface:  "Ten years ago, when I became a Benedictine oblate, I knew two things: I didn't feel ready to do it, but I had to act, to take the plunge.  I also had no idea where it would lead."

Summary:  Kathleen Norris, a poet by trade, took steps to become a Benedictine oblate.  This book relates some of her experiences while on that journey along with her reflections on life inside the monastery, the liturgical world of the church, life outside the monastery, what it means to be a writer and all the things that went on in her life during this time period.  It is a memoir, but it is not told in a linear fashion.  Rather, it follows the liturgical year of the church.

My thoughts:  If the number of quotes copied into my commonplace book is any indication of how much I enjoyed a book, this one would be near the top of the list. And I did enjoy this one.  However, I was a little disappointed that it wasn't a more linear story of her experience.  I found myself with lots of questions I wanted answered.  When I was able to just get over that, I enjoyed the journey.

I have always been fascinated with stories of people who choose to live differently than the majority of those around them.  Kathleen Norris applied to become an oblate after an encounter with Benedictines at a conference.  The St. John's Abbey website explains an oblate like this:

Saint Benedict founded his first monastery about 1,500 years ago. Over time, men and women, friends and neighbors outside the monasteries wanted to be affiliated with the work and prayer of the monks. These individuals were often married, had family obligations, and employment. They lived outside of the monastery but offered themselves to God, dedicating their lives to the guidance of the Rule of Saint Benedict as oblates. The word “oblate" comes from the Latin oblatus, which means someone who is offered up or dedicated to something.

Norris is married and has an outside job. However, she chose to become an oblate and spent two nine-month terms at St. John's Abbey. The framework for her story is the church's liturgical year. Immersing herself in this by living at the Abbey had a deep affect on her. As she tells her story, she also reflects on the liturgy and rituals of the church and Benedictine life. We are introduced to monks and nuns that she associates with as well as those from the past along with lives of the saints. Interwoven into this is the reality of her life with her husband and the difficulty of being apart for many months. We also learn something about her past, the family she grew up in, and the decision she and her husband made to move to her ancestral home in South Dakota.

This book was beautifully written and fascinating. Something that struck me was that those living the cloistered life as monks and nuns deal with the same struggles, temptations and difficulties that the rest of us do. Somehow I have always thought that removing yourself from "normal" life would also remove some of the difficulties. The difference is that monastics are living among people who have the same beliefs and are trying to life their lives in the same way. I guess in some ways that would make dealing with struggles a bit easier. If you enjoy memoirs or are interested in Benedictine life, you might enjoy this book.

"To eat in a monastery refectory is an exercise in humility; daily, one is reminded to put communal necessity before individual preference. While consumer culture speaks only to preferences, treating even whims as needs to be granted (and the sooner the better), monastics sense that this pandering to delusions of self-importance weakens the true self, and diminishes our ability to distinguish desires from needs. It's a price they're not willing to pay."

"One year at the American Benedictine Academy convention, an abbot, speaking on the subject of 'The Monastic Archetype,' suddenly dropped all pretense to objectivity and said he was troubled by the growing number of cereals made available for breakfast in his community. 'How many kinds of cereals do we need,' he asked, 'in order to meet genuine health needs without falling into thoughtless consumerism?'"

"I find it a blessing that monks still respect the slow way that words work on the human psyche."

"Moments like this are when the congregation is reminded of something that all pastors know; that listening is often the major part of ministry, that people in crisis need to tell their story, from beginning to end, and the best thing - often the only thing - that you can do is to sit there and take it."

"Metaphor is valuable to us precisely because it is not vapid, not a blank word such as 'reality' that has no grounding in the five senses. Metaphor draws on images from the natural world, from our senses, and from the world of human social structures, and yokes them to psychological and spiritual realities in such a way that we are often left gasping: we have no way to fully explain a metaphor's power, it simply is."

"The fact that the translators imagine 'night' to be an adequate substitute for 'darkness' only proves that they have a seriously impoverished understanding of metaphor and the nature of language."

Email ThisBlogThis!Share to TwitterShare to FacebookShare to Pinterest
Labels: 52 Books in 52 weeks, memoir, read in 2021