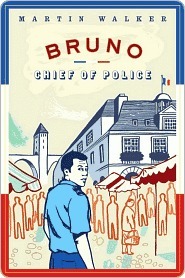 First Line: "On a bright May morning, so early that the last of the mist was still lingering low over a bend in the Vezere River, a white van drew to a halt on the ridge that overlooked the small French town."

Summary:  Benoit Courreges, aka Bruno, is chief of police for the small town of St. Denis. Not much happens there and that is just how Bruno likes it.  He is currently working with the members of the town who offer their wares at the local market to head off the European Union health inspectors.  So, when Bruno receives a frantic call from Karim stating that there may have been a murder, he is shocked.  But he quickly shifts into the mode of calm, collected chief of police that he is.  The murdered man is the grandfather of Karim.  He kept to himself, usually only visiting with his son and grandson.  The unusual way he has been murdered causes Bruno to dig through the history of France to uncover who might have murdered the man and why.

My thoughts:  Cathy at Kittling: Books highly recommended this series, so I thought I would give it a try.  I am so glad I did!  It only took a page or two for me to become enveloped in Bruno's world of southwest France.  And what a delicious world it is, full of wonderful descriptions of the countryside and sumptuous meals.

Readers will find it difficult not to like Bruno.  While he is Chief of Police, he is also a member of the community.  He is well-liked and is known as the most eligible bachelor in town.  He plays tennis and rugby and teaches young people to play.  But mostly, he enjoys spending time at his home in the country with his dog.  He gardens, makes wine and hunts.  What I liked most about him was his sense of justice and right and wrong. He listens to others and can often understand where they are coming from, but he is not easily swayed from the law.

"I follow the law, and not only because it's my job. And the law says anybody who is born here is French, whether they are white or black or brown or purple. And if they're French, they're just the same as everybody else in the eyes of the law, and that means in my eyes."

The National Police get involved in the investigation because of the nature of the murder.  So, really, Bruno is not the chief investigator on this case.  I loved the way in which he was willing to allow them to take the lead.  However, he does plenty of investigating and his knowledge of the local people is very helpful.  In order to solve the murder, he must go all the way back to World War II.  It was interesting to learn about the war from this perspective.  I found it interesting that the people of the town were often still identifying themselves with their role in WWII.  At one point, I had to go back and check to make sure the novel was taking place currently and not just after the war.  The inclusion of cell phones and computers got my thinking straight.

I thoroughly enjoyed spending time with Bruno and am looking forward to reading the second book in the series.