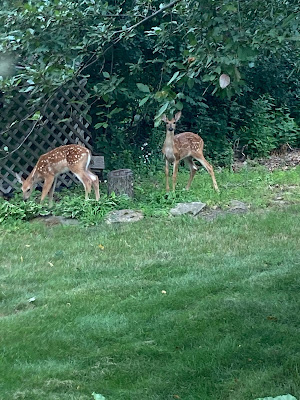 The month of August truly flew by with not much going on.  The yard and garden took on the late summer look and the crickets perform their symphony every morning and evening.  It is amazing to me how they seem to know it is August and time to perform!  Those two cuties in the picture above have been seen around our yard and neighborhood quite a bit this month.  That picture was taken near the beginning of the month and by now they look like adolescents and their spots are barely visible.

I read 8 books in August.  Here's the breakdown:

Death at La Fenice (Commissario Brunnetti #1) by Donna Leon -   Maestro Wellauer is found slumped in his easy chair just after intermission at the opera.  Nearby on the floor is the coffee cup that he had been drinking out of.  It is apparent that he has been poisoned.  Commissario Guido Brunetti is assigned to the case.  In the absence of any evidence, he begins to question everyone who knew the man in order to get a better understanding of his life.  The more questions he asks, the darker and more complicated the picture becomes. I really liked this book and am looking forward to reading the next in the series soon.
Non-fiction:

Love People, Use Things: Because the Opposite Never Works by Joshua Fields Millburn & Ryan Nicodemus - The authors, aka The Minimalists, explore what it might look like to remove excess clutter from your inner life by looking at seven relationships.  Well written and researched, but didn't resonate with me.

The Pleasures of Reading in an Age of Distraction by Alan Jacobs - The author makes the point that even in this age of distraction, plenty of people still read.  In this book he attempts to answer what we should read and why.  There was a lot to like in this book, but I found it a bit rambling.  I often was hard pressed to figure out the point he was making.

When Twilight Breaks by Sarah Sundin - This takes place in Berlin and Munich in the days leading up to Kristallnacht.  Evelyn Brand is a female journalist working in Germany and Peter Lang is conducting research on language learning at the University of Munich.  The two of them work together to sort through the propaganda in an effort to find the truth and report it to their fellow Americans.  Interesting and thought-provoking.

Closely Harbored Secrets (Seaside Cafe Mystery #5) by Bree Baker - Charm, North Carolina is preparing for the ghost walk that is held every fall.  There are lots of legends about the town and every fall all the best stories are told accompanied by actors in costume.  Everly Swan is providing the refreshments and her aunts are involved in the story telling.  As if the event isn’t creepy enough, one of the actors is found dead on the beach.  And, of course, Everly discovers the body. This is one of my favorite cozy series and this one left me with a smile on my face.

Crime & Punctuation (Deadly Edits #1) by Kaitlyn Dunnett - After the death of her husband, Mikki moves back to her hometown and begins working as a freelance editor.  Her first client is a local woman who has written a crime novel.  After reading the first few chapters, Mikki is pleasantly surprised and looking forward to working with the woman.  Unfortunately, the woman is found dead.  Initially, the death is ruled accidental, but Mikki is not convinced.  As she reads more of the manuscript, she realizes the author left some clues behind.  I enjoyed this first book in the series and am looking forward to reading more.

Network of Deceit (Almara Alvarez #2) by Tom Threadgill - A teenage boy was found dead floating on an inner tube down the lazy river at the local water park.   It was a hot day, he had some alcohol in his blood.  Probably died of heat exhaustion. However, when the Medical Examiner notices something that points to the boy being dead before he got in the water, Detective Almara Alvarez has something to go on.  This was a complicated mystery involving cyber-crime.  I love this series and am anxiously awaiting the next installment.
Fiction:

Home (Gilead #2) by Marilynne Robinson - Reverend Boughton is well-advanced in years and is becoming more feeble each day.  Glory is the youngest of the eight Boughton children.  After her life fell apart, she returned home to care for her father.  Jack, the black sheep of the family, returned as well. He and Glory begin the work of getting to know one another while caring for their father and keeping him happy.  This is a complicated and moving story that I will not soon forget.  (Review coming soon)
I hope your August was filled with good books!
~ Gretchen

I'm also linking up with The Sunday Salon hosted by Deb @ Readerbuzz.

Email ThisBlogThis!Share to TwitterShare to FacebookShare to Pinterest
Labels: monthly wrap-up, read in 2021