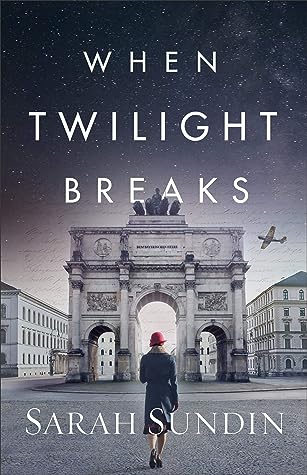 First Line: "Berlin, Germany.  Tuesday, March 15, 1938. Evelyn Brand had done a crack bit of journalism, and she hadn't even had to dress like a man to do so."

Summary:  Evelyn Brand is a journalist working for the American New Service in Berlin.  It is not easy for a female to be in this line of work.  She is often passed over for big stories regardless of the quality of her work.  When she is sent to Munich to cover a story about  American students attending the University of Munich and their experiences, she once again feels she has been passed over.  Her male colleagues are given assignments in Berlin covering Hitler, the Nazi party and other political happenings.  Her boss gives her a contact at the University, Peter Lang.  The two men were roommates at Harvard.  Peter is a professor earning his doctorate in German.  He will be able to put her in touch with American students.

Peter Lang is conducting research on language learning.  He has analyzed the way the mouth moves when speaking German and this has allowed him to help his English speaking students to more easily speak the German language without sounding like foreigners.  As Peter and Evelyn work together, the difficulties in Germany escalate.  Sarah longs to be able to report what is really going on in Germany to her American readers, but her boss proofs and changes her work before it hits the press.  Peter begins using his contacts with the Nazi party to feed Evelyn information that will help her get the stories out.  How long will they be able to keep this up before the truth comes out?

My thoughts: Every book I have read by Sarah Sundin has been enjoyable and this one was no exception.  She knows how to tell a good story.

Evelyn Brand is hard-working and feisty.  She handles herself well in a workplace full of men.  Her deepest desire is to report the truth.  Unfortunately, that is not what Germany wants the world to hear.  Germany wants the world to hear that life in their country is so much better than other places in the world.  That things are orderly and controlled.  But, Evelyn finds ways to report truth that won't upset Germany.  Unbeknownst to her, her boss is a supporter of the German agenda and often changes the wording of her articles before they go to press.  The male reporters are able to send their articles directly to New York, but Evelyn's must first be checked by her boss.  She is obviously frustrated by this, but handles it well.  Lying and cheating are not things she is willing to do, but she comes up with clever ways to get around the barriers in her path.  It was interesting to be immersed in the world of a female reporter in this era.

Peter Lang is such a good guy.  He is a genuinely caring person.  This comes through in his interactions with his students, his boss, and his co-workers.  He prefers things to be orderly and well-organized and arranges his life this way.  He is impressed with some of the ways Germany has created order.  At first, he thinks America would do well to imitate Germany.  But as he begins to see what is really going on, he realizes that Germany has taken things too far and he is the first one to stand up against the wrong attitudes of the Nazi party.  However, since he has contacts with the Nazi party, he uses those to gain information for Evelyn so she can get the word out to the United States.  It is a dangerous game he is playing.

Peter's work is interesting.  He is teaching German to American students, but in a unique way.  He has studied the way a German speaker moves his mouth and tongue when he speaks.  This knowledge helps to remove the accent that many Americans have when trying to speak German.  It can also go the other way - helping German speakers who are learning English to lose their accent.  In the author's note at the end of the book, she indicates that many of the elements of Peter's work are based on work done by her grandfather.

The bulk of the story takes place in the months leading up to Kristallnacht, the night when the homes and businesses of many Jewish people were destroyed.  Not only that, but many were killed or captured and sent to concentration camps.  The chaos and fear of that night are well portrayed by the author.  I learned a lot about what it was like for an ordinary person in Germany during those months.  The author took us to speeches given by Hitler, Nazi party meetings, concerts and movies.

The faith element of the story was worked in seamlessly.  As the atmosphere grows more tense and dangerous, both Peter and Evelyn turn to God to help them through their difficulties.

There is also a romance element in the story, but it is not overbearing and really is an aid to the storyline.

Overall, this was a really good story containing many of the things I love in a book - great characters who do interesting work, a good sense of place, and some historical tidbits. If any of these things appeal to you, give this book a try.

"'I like jazz, but some of the modern works are too atonal and chaotic for my taste.  Classical music will always be my favorite.'"

"A man like her father, good and kind.  Papa let her be herself.  Papa took pride in her spunk and her accomplishments."