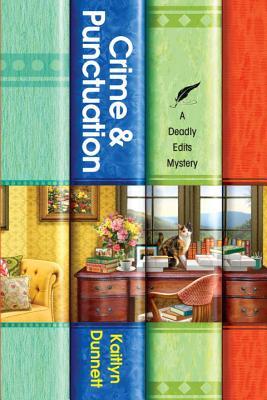 First Lines: "'I don't know, Cal.  It doesn't look good.'  Always the silent type, Cal stared back at me with big green eyes and an enigmatic expression."

Summary: After her husband died, Mikki Lincoln purchased the home she lived in while growing up and relocated to her hometown.  In order to pay for some of the remodeling that the house needs, Mikki has been freelancing as an editor.  One of her first clients is a young woman with a book manuscript.  As Mikki begins reading the manuscript she is pleasantly surprised.  The book shows promise and she is looking forward to working with Tiffany to make the book publishable.  Unfortunately, before that can happen, Tiffany is found dead.  The police show up to question Mikki because her business card was found on the dead woman's body.  The police ultimately close the case as an accidental death.  But Mikki is not convinced.  As she reads the rest of Tiffany's book, she is more convinced than ever that her death was intentional.  But, will she be able to convince the police to continue their investigation?

My thoughts:  Mikki's job as an editor is what drew me to this series.  But I found plenty to like besides Mikki's chosen profession.  First of all was Mikki herself.  Newly widowed and still grieving, she has a lot to overcome.  She moved back to her hometown on a whim.  When she saw her childhood home for sale, she didn't hesitate to buy it.  But she also didn't really think through what moving back to an area she hadn't lived in for 40 years would mean.  Reconnecting with people who knew you long ago can be difficult.  I found Mikki to be very relatable and funny.

Mikki immediately connects with her friend Darlene and the two of them are quite a pair.  Darlene's husband Frank spends a lot of time golfing, which makes it possible for Darlene and Mikki to spend large amounts of time together.  Darlene has some health issues and never knows when a day is going to be good or bad.  Mikki understands and is always willing to help however she can.  When the two of them put their heads together, they are a force to be reckoned with.

Tiffany's death is ruled accidental or possibly a suicide.  Mikki doesn't believe it.  As she feeds the detective clues, he doesn't seem very appreciative.  To complicate matters, Tiffany's grandmother was Mikki's nemesis in high school and she still treats Mikki as if she is beneath her.  As the mystery unravels and Tiffany's grandmother is right in the middle of it, Mikki is able to put aside any hurt feelings she has and look at things objectively.

I enjoyed the descriptions of the small New York town.  It sounds like a lovely place to visit in the fall.

Overall, this was a great start to the series and I am looking forward to spending more time with Mikki.