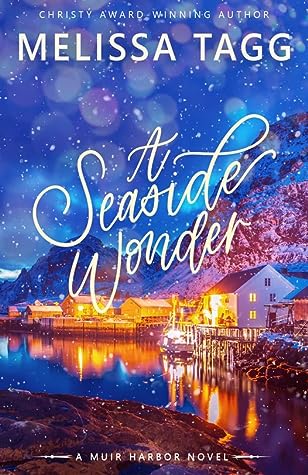 First Line: "If not for the proprietor's name on the little shop's window, Philip might never have thought of it again."

Summary:  Indi Muir has never recovered from the decision she made eleven years ago.  Since then her life has seemed to be a series of distractions to help her forget.  When her ex-fiance returns to Muir Harbor with news that is going to force her to face what she has been running from, Indi begins to feel like her carefully constructed world is falling apart.  To top it off, someone has been sneaking around Muir Farm looking for something.

When his mother died, Professor Philip West was ,made guardian of his half-sister, Holland.  This caused him to move back to Maine and into his grandfather's house, a place that feels cold and lonely.  Holland doesn't seem to want Philip around and is sure she can take care of herself.  Encouraged by a friend to get away for a while and take Holland with him, Philip decides to return to Muir Harbor, a place that made him feel at home.  It all sounded ideal in theory, but in practice it is more complicated than he imagined.

My thoughts: Melissa Tagg is quickly becoming a favorite author.  A Seaside Wonder drew me in from the very beginning.  This is the second book in the Muir Harbor series and we step into the story at a place overlapping with the previous book, but from a different perspective.  Autumn by the Sea was told from Neil Muir and Sydney's perspective.  This book is told from Indi Muir and Philip's perspective.  Stepping into part of the story we already knew was a unique and interesting twist.

Indi Muir was adopted by Maggie Muir when she was a baby, so this is the only family she has ever known.  Just after high school, she made a life changing decision.  Since that time she has done all she can to make up for it.  If she stays busy, she won't have time to think or feel.  Indi thinks her family and others see her as a mess - as someone who doesn't think before she acts and gets herself into difficult situations.  The reality is that her family sees her as a talented, creative and kind young woman who has the confidence to take risks.  I loved the way the author took us along on Indi's journey of growth.

You couldn't help liking Philip from the very beginning.  He is generally quiet, shy, studious and some would say boring.  But he is also funny, kind, practical and thoughtful.  After his best friend's wife describes him as "shy and bookish", he had this conversation:

"'Shy and bookish are not insults.  Not according to my wife.  She says it makes you endearing.'

The opening scene where Indi and Philip meet - the meet-cute - is hilarious.

While there is romance, there is so much more to the story.  There are themes of abandonment, family - birth family, found family, who is your family - , grief, love, faith, loyalty, prayer, loss, failure, and being thankful for what you have.  Once again, this story has a little romance, a little mystery and a little family drama.  Together they made a wonderful story full of depth and humor with a satisfying ending.  There were several story lines that were begun in the first book that continue in this one.  Some are brought to conclusion, some are advanced and some have not yet been finished.

If this book sounds interesting to you, I would recommend you start with the first book, Autumn by the Sea.  It is a story you won't want to miss and you will be introduced to the Muir family and Muir Harbor.  Now I will be eagerly awaiting spring because that is when the next installment of Muir Harbor will be available.

"The night air felt fragile somehow, a crystalline moon tucked into black velvet, the morning's mild temps lost to a brittle breeze that wisped its way in and around the bare branches of Muir Farm's backyard trees."

"... no, none of this had been chance.  All of it had been a gift from the God who was teaching him how to wonder again.  Teaching him through the beauty of a seaside farm and a tiny town at the edge of a lit-up harbor.  Through all the ups and downs of finding his place in Holland's life."

"'Look at Maggie.  She doesn't pretend she doesn't have holes in her heart where Robert and Diana and her granddaughter should've been.  But she still has beauty and joy and love in her life.  She's figured out how to live in the tension between honest heartache and steadfast hope.  She's put her trust in a God who...who maybe doesn't make every crack disappear, but who holds all her broken pieces tenderly.  Who heals her simply by being with her.  Staying with her.'"