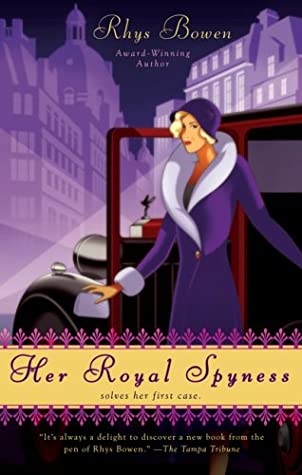 First Line: "Castle Rannoch, Perthshire, Scotland. April 1932. There are two disadvantages to being a minor royal."

Summary:  Lady Victoria Georgiana Charlotte Eugenie, daughter of the Duke of Glen Garry and Rannoch, is thirty-fourth in line for the throne of England.  As such, she is expected to behave in certain ways and do certain things.  One of these things is marrying into a noble family.  Being that she has already come out in society, this is at the top of everyone's mind.  Everyone being her brother, her sister-in-law and the Queen.

When her brother cuts off her allowance, she decides it is time to make her own way in life.  She decides to go to London and stay in the family house there.  The problem is she can't afford a maid.  She has never had to dress herself or cook her own food before.  She decides the only thing to do is to get a job, which is unheard of for a member of the royal family no matter how distant the throne is.

After a hard day's work as a maid, she returns to the family home to find a corpse floating in the bathtub.  Concerned that her brother might have been involved and concerned that her secret life as a maid might be revealed, Georgie hesitates to notify the police.  Her fears are realized when she does notify the authorities - both she and her brother are suspects.  With the help of her friend Belinda, she tries to discover who this man in the bathtub is and who might want him dead.

My thoughts:  This is one of those books that is so easy to read.  The writing style is witty and sharp, the dialogue is humorous and the storyline is well paced.

Lady Georgiana is a brave woman.  She is willing to do things she has never done, such as collect coal from the cellar to start a fire, attempt to make herself a meal, and reside in a big, old drafty house by herself.  But often times her courage and bravery get her into trouble. At times she had to invent lies about the lies she had already told.  While she was unwilling to compromise in some areas, in others she readily did things she ought not do.  Georgie is an entertaining main character and I enjoyed her narration.

The supporting cast is equally well developed.  Her friend Belinda is always there for her, unless she has been out late to a party.  Her constant talk about sex did get annoying.  Fortunately, it wasn't overly graphic.  One of my favorite characters was Georgie's grandfather on her mother's side.  He is definitely not in the royal line and is a little rough around the edges.  I love the relationship he has with Georgie.  And then there's Darcy, who is a good friend to Georgie and maybe more.

The mystery wasn't overly strong and was kind of overshadowed by Georgie's life, but since this was the first book in the series, that is somewhat expected.  There is definitely a mystery to be solved and it held my interest and surprised me with its outcome.

I enjoyed learning about the expectations of the royal family and of society in general in 1932 London.  Times were tough and belts needed to be tightened even in the royal family.

There was a lot to like about this one, but I don't think I liked it as much as I thought I would.  I was a little underwhelmed probably due to the fact that I had heard so many great things about this series and had high expectations. It was a light,  fun read and one that I would recommend.

"There is nothing as lovely as a London Park in springtime.  Daffodils among the trees, new green emerging on those spreading chestnuts, elegantly turned-out horses crossing from the riding stable toward Rotten Row, and courting couples strolling hand in hand or sitting rather too close to each other on the benches."

"Lunch was a huge success - lovely leg of lamb, crispy roast potatoes and cabbage from Grandad's back garden, followed by baked apple and custard."