Book Review: Body on the Bayou by Ellen Byron 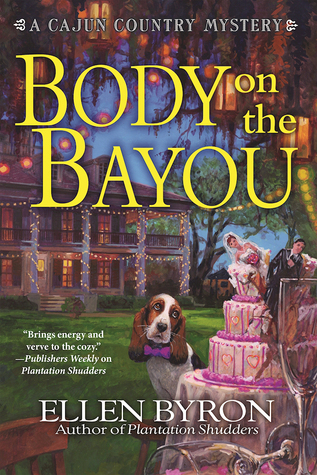 First Line: "It was midafternoon and Maggie Crozat had already led five large tour groups through Louisiana's Doucet Plantation, a historic state landmark once owned by her ancestors."

Summary:  Maggie's co-worker, Vanessa, has asked Maggie to be Maid-of-Honor in her upcoming wedding to Police Chief Rufus Durand.  Vanessa is the epitome of a Bridezilla.  She has given Maggie a to-do list a mile long.  When Vanessa's cousin Ginger shows up unexpectedly, Vanessa assumes Maggie's family will find room for her at their Bed and Breakfast.  Maggie has heard Vanessa and other family members complain about Ginger, so Maggie is expecting a terrible experience.  However, when Ginger shows up she is very polite and generous.  Maggie is relieved that she has one less thing to worry about.

Her sense of well-being comes to an abrupt end when Ginger's body is found at the edge of the Bayou.  Suspects abound as the truth about Ginger's life comes to light.  The Pelican Police Department is on the case, but Vanessa begs Maggie to find Ginger's killer.  Maggie tries to tell Vanessa that finding a killer is outside of her Maid-of-Honor duties, but Vanessa won't let it go.  As Maggie begins looking into Ginger's life, she finds herself compelled to solve the mystery.

My thoughts:  One of the things I love most about this series is the strong relationship Maggie has with members of her family.  That definitely comes through in this book.  Since we already know the characters, we are able to jump right into the story. I was drawn in immediately.

Maggie helps her parents run Crozat Plantation Bed and Breakfast, a home that has been in her family for generations.  She has a close relationship with both of her parents, although their roles are minor in this story.  Grand-mere Crozat shares a house on the plantation with Maggie.  She helps out around the B & B, is always immaculately dressed and is often found with a cocktail in hand after 5 pm. She is always quick to encourage Maggie and remind her that she believes in her.   Maggie's cousin Lia also lives in town and runs a bakery.  She and Maggie are the best of friends.

Vanessa was a secondary character in the first book and we definitely learn more about her.  Maggie realizes that she was chosen as Maid of Honor because no one else would accept the position.  But, Maggie takes her responsibilities seriously and does the best she can with the unreasonable requests of the bride.

Two of my favorite characters in this series are Detective Bo Durand and his autistic son, Xander.  Maggie and Xander have connected through art and I really enjoy how that is progressing.

The mystery kept me guessing with plenty of suspects. As Maggie learns more about Ginger's life, she finds more people who had reason to kill her.  The suspects all have secrets too, which leads to more possibilities.  I was beginning to despair it would ever be worked out.  I shouldn't have worried.  It all came together perfectly and at just the right time.  I was completely taken by surprise when the culprit was revealed.

There were a few surprises at the end which set up the next book.  I am glad to be behind in this series so I won't have to wait for the next book to come out.

"Gran sighed and shook her head. 'Oh, my darling girl.  Someday you will have children.  And your life will revolve around them to the point where you have only vague memories of what it was like before they entered the world.  And then you will have to let them go.  You won't know what to do with yourself at first.  But eventually you'll find the life you had before, or even a better one, if such a thing is possible.  And your children will always be part of that in some way.  You will not lose them.'"