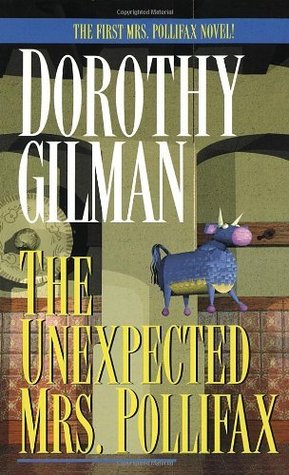 First Line:  "The nurse walked out of the room, closing the door behind her, and Mrs. Pollifax looked at the doctor and he in turn looked at her."

Summary:  Mrs. Pollifax, a widow with grown children, is feeling useless.  She realizes she detests all the volunteer work she does.  When her doctor encourages her to do something she has always wanted to do, she decides to visit CIA headquarters.  The thing she has always wanted to do is become a spy.  Of course, one doesn't just walk into CIA Headquarters and become a spy.  However, in a case of being in the right place at the right time, Mrs. Pollifax is drafted into the CIA as a courier.  When Mr. Carstairs sees her, he knows she would make the perfect tourist.  Mrs. Pollifax is eager to take on her assignment and is sent to Mexico City.  All she has to do is go into a bookstore on a certain day at a certain time and say a certain thing.  The rest of the time, she is to explore Mexico City to her heart's content.  As often happens, things don't go smoothly and Mrs. Pollifax is taken captive.  Will Carstairs be able to rescue her before it's too late?

My thoughts:  What a fun read this was!  Mrs. Pollifax is kind, witty, astute and eager to do whatever is necessary in the life of a spy.  She is also a hoot! Because of her age, she can get away with things others wouldn't be allowed to.  She makes friends wherever she goes because she is truly interested in other people's lives.

There is a lot of spy thriller-type action as Mrs. Pollifax and her cohorts attempt to save their lives.  It was a great story with lots of action.  Along the way Mrs. Pollifax meets several interesting people and many who she would like to meet again in different circumstances.

While the premise of an older woman being recruited to the CIA and falling into these circumstances is a bit unlikely, the story itself is solid.  It is full of real danger and real difficulties.  Mrs. Pollifax doesn't just breeze through the circumstances, she suffers and loses hope.  But as she perseveres, she also becomes a stronger person. She forms real friendships with the people she finds herself in the circumstances with and they help and encourage one another.

I am glad to see there are several more in this series.  I wasn't ready to let Mrs. Pollifax go yet.  If you have yet to meet her, I urge you to pick up this first novel in the series.