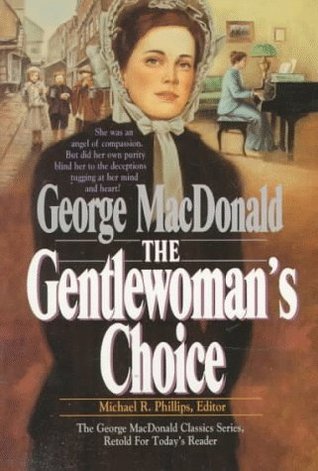 First Line: "It was a gray, windy noon in early autumn - certainly not the sort of day one would choose for a holiday."

Summary:  Hester Raymount is a young woman who desires to serve God by serving the poor.  Unfortunately doing so is not as easy as it would seem.  Some look down upon her for spending time with the poor, while others feel she is putting her life in danger by exposing herself to smallpox and other illnesses.  When her wayward older brother disappears and her younger brother is ill, Hester is called on to show compassion to those nearest to her.

My thoughts:  George MacDonald's writing can be difficult to read at times.  It can be wordy and he often sermonizes, but persisting is very rewarding.  George MacDonald's way of seeing the world is illuminating.  He has a way of getting to the heart of a character's motivations that causes the reader to pause and reflect.

In this story we have Hester, who is a good person that desires to follow God.  We have her older brother, who is a Prodigal Son character.  Her youngest brother is still quite young, but follows God with a childlike enthusiasm.  Her mother doesn't like conflict and tries to protect her children.  Her father is distant and feared by his children.  Hester's fiancee is a shallow man, but Hester believes he will become deeper.  Each of these characters changes and grows in profound ways throughout the story.

One of the major themes in this book is letting God use you right where you are.  Hester exemplifies this when she uses her ability to play music to encourage others.  She doesn't feel like that is doing anything, but finds that it is often just what is needed.

This isn't an easy read.  I often found myself re-reading passages because I got lost and forgot what he was talking about.  I also had to stop and think about a passage at times.  But, this is a book that will hang around in my mind for some time to come.

"A home where children are humored and scolded and coaxed and punished instead of being taught obedience is like a moral slaughterhouse instead of the training ground it was meant to be.  So-called 'Christian homes' can be the worst of all in this regard."

"The truth is when a man cares for nothing that is worth caring for, the fault must indeed lie within himself - in the character the man has made, and is making, out of the nature God has given him."

"She was perhaps the only one able to love him fully, for the mother's heart more than any other God has made is similar to his in the power of loving."

"The only way to learn the rules of anything practical is to begin to do the thing."

Email ThisBlogThis!Share to TwitterShare to FacebookShare to Pinterest
Labels: 52 Books in 52 weeks, classic, Literary Life 19 for 2021, read in 2021