Book Review: My Own Two Feet by Beverly Cleary 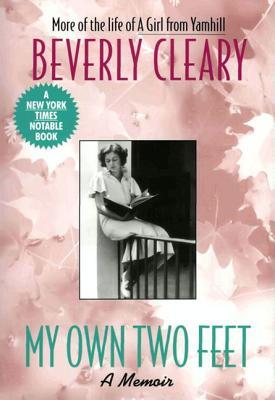 Summary:  This is the second installment of Beverly Cleary's autobiography beginning after her high school years in the 1930's.  It covers her time at college in another state, various jobs, dating, marriage and getting her first book published.

My thoughts: This is an interesting look not only at the author's life, but California and Oregon in the late 1930's and 1940's.  The book opens with Beverly leaving her home in Oregon to travel by Greyhound to California to stay with her aunt and uncle.  Our country was in the midst of the Depression and Beverly was weary of it.  In California, people didn't live like the Depression was so close.  She says, "The Depression had made Oregonians relentlessly practical." When she meets some friends of the family and they go to eat in a restaurant, she is amazed.  No one she knows eats in restaurants.  Her eyes are opened to many things on her trip to California.  It was fascinating to hear what things cost, how women made most of their clothing, and how far they were able to make food stretch.  It was also fascinating to read about the jobs many women had at the time.  Her aunt was a librarian at the college.  Beverly not only attended college, but worked her way through it at a time when that wasn't always easy to do.  Not only because of the work involved, but because many jobs were not given to women because that would be taking a job from a man who needed to support his family.

Beverly had a difficult relationship with her mother.  She was an only child and her mother wasn't ready to let her go.  She had strong ideas about how Beverly should live her life and who she should or should not marry.  Unfortunately, this caused Beverly to dread going home at times.

After finishing college, she worked at several interesting jobs.  As a children's librarian, in a bookstore and in a library on an army base.  She had always wanted to write, but was too busy.  Finally after the war, she determined it was time.

I have always enjoy Beverly Cleary's clear writing style.  I love the way she describes things in detail, remembering the little things that make up day to day life.  I found it interesting that she mentions this advice from one of her professors - "One sentence that he repeated has stayed with me all my life, and I often think of it as I write: 'The proper subject of the novel is universal human experience.'  A phrase that has also stayed with me is 'the minutiae of life,' those details that give reality to fiction."  Those things definitely show up in her novels and in this book as well.

If you are interested in Beverly Cleary's life or learning more about California and Oregon in the Depression era give this book a try.  I highly recommend it.

Email ThisBlogThis!Share to TwitterShare to FacebookShare to Pinterest
Labels: 52 Books in 52 weeks, memoir, non-fiction, read in 2021