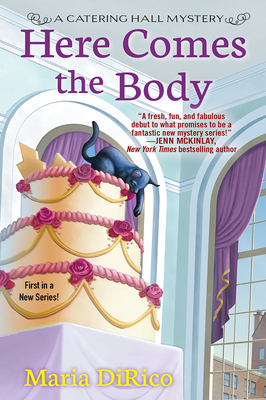 First Line:  "At 6:45 A.M., Mia Carina woke up to Frank Sinatra singing 'New York, New York' from the alarm on her phone, a happy reminder that she was in Queens, not Florida, and no longer a 'person of interest' in her adulterous husband's disappearance."

Summary:  Mia Carina has returned to New York to help her father run a catering business.  Her father, Ravello Carina, received the catering hall from a gambler who couldn't pay his debts.  He has decided to try the catering business as a new career, rather than returning to the work he used to do for mob boss Donny Boldano.

The first function the hall is catering is a bachelor party.  The groom's friend has hired a DJ as well as a large cake with a surprise.  When the cake is rolled out to the party, they receive a surprise indeed.  When the expected woman doesn't jump out of the cake, someone takes a look inside.  There is definitely a woman in there, but she has been stabbed.  That is not the surprise the friend of the bachelor had in mind, but it also isn't the woman he had expected to see.  Instead, the woman who has been stabbed is someone who had been at the catering hall the day before accusing Ravello of owing her money.  Did Ravello take revenge on her?  Or is someone trying to set him up?

My thoughts:  When I first saw reviews for this book I didn't think I would be interested.  There were just some things that I thought might not be for me.  But, as I continued to see positive reviews for the book and the second one in the series, I changed my mind.  Unfortunately, this one fell flat for me.

As I read the book I got the feeling that I had been dropped into the middle of a conversation.  Something was going on, but I didn't have the whole story.  Also, the characters felt a bit two dimensional.  I just didn't warm up to them.  The humor wasn't funny to me.  Maybe that is because I am from the Midwest and I don't get Queens humor, but I don't think so.  The characters felt over-the-top and not genuine.

However, the mystery was good.  There were plenty of suspects who would want revenge on Ravello Carina.  But, there is also the idea that Ravello is/was a mobster and his own daughter doesn't know what to believe. I was kept guessing until the killer was revealed.  When things were wrapped up, it all made sense.

Even with the good mystery, I will not be reading the rest of the series. Other reviewers have really enjoyed this series, especially because it is unique for a cozy mystery with the mob influence.  If this sounds interesting to you, give it a try.