Book Review: The Right Sort of Man by Allison Montclair 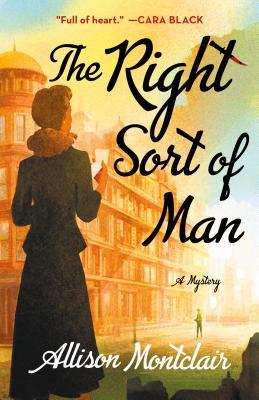 First Line:  "Tillie climbed the stairs from the Bond Street Station out to Davies Street, blinking in the afternoon light."

Summary:  Iris Sparks and Gwen Bainbridge met at a wedding. Each was there alone, so they spent the evening chatting.  Iris noticed that Gwen was excellent at reading people.  Gwen noticed that Iris "knew people".  They decided they would make a good team and came up with the idea to start The Right Sort Marriage Bureau.

The war has ended and Iris and Gwen have been running The Right Sort for a few months when a new client visits them.  Tillie LaSalle is looking for a husband.  Iris and Gwen put her through the questioning process and send her on her way with the promise of hearing from them in a few days with a possible candidate.  After checking their files, they come up with just the right man for Tillie and make arrangements for the two of them to meet.  However, when they report to the office the next morning they learn that Tillie has been murdered and the candidate has been arrested.  How can this be?  Neither of them believes Dickie Trower is capable of murder.  There did seem to be something off about Tillie.  She seemed like a nice girl, but she may have been hiding something.  Was Tillie involved in something that got her killed?

My thoughts:  It took me a while to warm up to this one.  It wasn't until I was more than half way through that I connected with the main characters.  I'm not sure why.  But, once I got in the groove, I didn't want it to end.

Iris Sparks has a past, most of which she can not tell Gwen about.  She served in the military in some capacity and hints that it was in some sort of special operations.  She lives on the edge, takes chances.  She knows people in high places and low places.  Both come in handy.  She has had two fiancees and is now in a relationship with a married man.

On the other hand, Gwen, also known as Mrs. Bainbridge, is a widow with a child.  Her husband died in the war.  She grieved deeply.  In fact, so deeply that her in-laws had her committed to a sanitorium and took custody of her child.  She now resides in their stately home with servants and calls her mother-in-law Lady Carolyne.  The ability to hold a job would put her in good stead with her in-laws, she imagines.  More than anything, she wants to regain custody of her child.

At a turning point in the story, Iris and Gwen are having a conversation about a man they have met in the course of their investigation that has taken a liking to Gwen.  This conversation points out their differences.

'So have yourself a fling and be done with it,' urged Iris.  'We're entitled to a little fun every now and     then.'

'Even if it's at the expense of someone else?'

She paused, not wanting to complete the sentence.

'Promiscuous?' said Iris.  'Is that the word that you hesitate to apply?'

'You're not promiscuous,' said Gwen. 'You're adventurous.'"

The mystery was full of twists and turns.  The police arrested their suspect, but both Iris and Gwen doubted he was the culprit.  They began looking into Tillie's life to discover who might have had motive to kill her.  This leads them to some interesting people and places.  Most of which Iris is comfortable in and Gwen is not.  In most of the situations they need to pretend to be ladies of a different place and class than they are which leads to them needing to speak, dress and act differently.  I was completely surprised when the culprit was revealed.

The best part of the story is the back and forth banter between characters.  The author is gifted in this and it is often hilarious.

Not only was this a great mystery, but it was full of historical information of time and place.  It takes place just a few months after the end of WWII in London.  I felt immersed in that world.  The main characters are interesting and deep.  They both grow in the course of the story which was enjoyable to watch.  Best of all, the story ends on a positive note and I look forward to reading the next book in the series.

"A park lay beyond it, much of it taken up by allotments for community gardens.  It will be nice when it goes back to its original purpose, thought Gwen.  When there's food enough again that we can all start enjoying life like we used to."

"'I'm glad you reminded me about that fish,' said Mrs. Dowd.  'It will give me something to do.  Someone to take care of.  That's all we need when all is said and done, isn't it?'"

"What would she require if she succeeded? She would at the very lead need a governess to take care of Ronnie while she went off to the Right Sort every day.  And a maid and a cook.  Or a maid who could cook.  Or a cook/maid/governess, if there was such a thing.  Oh, wait, she thought.  There are such things.  They're called wives."

"'Iris, there are so many differences between our lives.'