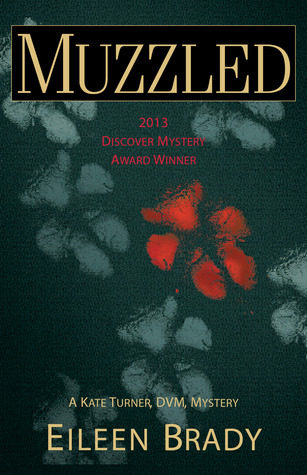 First Lines:  "'Where's the patient?' The teenage boy with the buzz cut waved me toward the living room.  A vacuum cleaner stood in the middle of the wall-to-wall beige carpet."

Summary:  Dr. Kate Turner is filling in at a veterinary clinic that makes house calls in upstate New York.  Doc Anderson is taking a year long cruise with his sister.  In the few months Kate has been working at Oak Falls Veterinary Hospital, she has become familiar with several of the clients. One in particular she has visited several times.  Vivian and Thomas Langthorne raise and show Cavalier King Charles spaniels.  With twenty-seven dogs, there is usually one who needs attention.  Kate is scheduled for a recheck of one of the animals.  However, when she shows up at the appointed time, no one answers the door.  She can hear the dogs barking inside, but figures her clients can't hear the doorbell over the din.  As she tries the door handle, she is surprised to find the door unlocked.  Upon entering the home, the first thing she notices is an overpowering odor.  She calls out as the dogs begin running circles around her.  When she reaches the living room, she is horrified by what she sees.  It appears as though Mr. and Mrs, Langthorne were having a tea party, however there is blood everywhere.  Something is wrong with this picture.  It appears to be a murder-suicide, but things don't add up.  Why were the dogs in the house?  The Langthornes loved those dogs, but usually kept them in kennels.  They would never let all of them in the house at the same time.  That would not allow for controlled breeding.  Kate had witnessed arguments between the couple that ten minutes later had been forgotten.  Did Thomas Langthorne kill his wife and then take his own life?  Or did someone want it to look that way?

My thoughts:  Author Eileen Brady has been a veterinarian for over twenty years.  Her experience added so much depth to the story.  It was fascinating to travel with Kate on her house calls and peek over her shoulder while she performed examinations or surgeries at the hospital.

Kate Turner is a likeable woman.  She is recovering from several months of  "mooning" over her former boss, who was going through a divorce.  He told Kate he needed her.  So she would go out to dinner with him and listen while he complained about his problems.  She thought the relationship was going somewhere until Tiffany showed up with her Pomeranian.  Now he is engaged to Tiffany.  Kate feels like a fool, but taking this job helped remove her from the situation.  She obviously loves animals.  You can actually see the vet in her take over when she meets with clients.  She is calm, collected and kind.   I feel like we have only scratched the surface of who she is though.

There are several supporting characters who have potential to become interesting.  Her assistant, Mari, for example.  She keeps Kate on track and never asks questions.  Then there is Mama G, the Italian grandmother who runs a local diner and makes the best pie.  Also, her grandson, Luke, the handsome man who works for the police department.  My favorite was Henry James.  A giant man with shaved head, Harley belt buckle and tattoos who also has a giant Siamese cat named Dante.  He is very tough on the outside, but gentle on the inside.

The mystery was complicated with plenty of suspects and red herrings.  I thought something was off about the culprit, but didn't suspect that person of the crime.

My favorite part of the story was all the interesting animals Kate met on her appointments and the descriptions of what was wrong with them and the treatment.

This was a good start to the series.  I am looking forward to spending time with Dr. Kate again.

Calendar of Crime = March, Book title has a word starting with "M", Money/Fortune/Inheritance has major role