Book Review: The Price of Valor by Susan May Warren 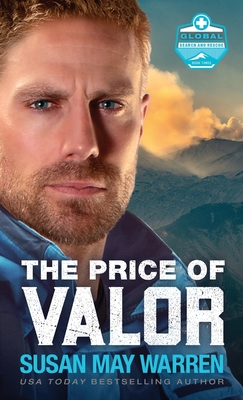 First Line: "As long as Hamilton Jones had breath in his body, nothing, not even tooth decay, would hurt his little girl."

Summary:  Hamilton Jones, Ham for short, is still getting used to the idea that he is a father.  His ten-year-old daughter, Aggie, came into his life just a few months ago.  His wife, Signe, who he thought died ten years ago, sent word to Ham letting him know that Aggie was his daughter and would he please take care of her.  After a yacht they were on near Italy exploded, Signe was able to get Aggie safely to shore and then disappeared.  Ham was shocked.  Not only was his wife alive, he had a daughter.  He is determined to find Signe and bring her home.

Senator White has invited Ham and his search and rescue team to a fundraiser in Washington D.C. White knows about Signe and Ham has high hopes that the real reason for asking them to the fundraiser is that he has information about her.  When Signe disappeared ten years ago, she had been captured by a terrorist.  She convinced the man that she was on his side.  While there, she discovered that he had stolen the NOC list.  The list of nonofficial covers of CIA operatives around the world.  She is afraid that her name is on that list.  So she stole it and planned a way to escape.  Now she is on the run.  She can't open the list because it is encrypted.  She needs to get it into the hands of someone who can open it and keep it safe.

Senator White sends Ham and his team to Italy to find Signe and get the NOC list.  Unfortunately, the very first day they are in Italy, Mount Etna, a volcano about 40 kilometers from the town, erupts.  The town becomes engulfed in lava and noxious gas.  The team is separated and as night falls they are trying to find one another.  Will they all survive?  Will the team be able to get back together and find Signe before the terrorists find her?

My thoughts:  Susan May Warren knows how to put her characters right in the middle of a natural disaster and keep the reader right on the edge of her seat.  This story definitely does that!

This time the natural disaster is the aftermath of a volcanic eruption.  Warren has a way with words that makes the reader feel as if she is right next to the hero.  These characters, both men and women, are heroes.  They are trained in various areas of helping others in trouble.  They are brave and willing to sacrifice their lives to help others.  If the other is someone they care about, they will go to extreme lengths to help.  Now, even though these characters often take risks and do dangerous things, they don't do them needlessly or without thought.  That is one of the things I really appreciate about these characters.  They don't needlessly takes risks, but regularly do things I can never imagine doing.  Such as climbing mountains or the sides of buildings.  Diving under water to escape gunshots or get out of a building filling with water.  Jumping from one high place to another.  Or simply knocking a bad guy senseless.  The adventure and bravery is what keeps me coming back to these stories.

The main focus this time is on Ham and Signe.  They have a lot to overcome.  First of all, Ham needs to convince Signe to stop running away from him.  He also needs to find out where she has been for the past ten years and why she never told him he was a father.  Some very difficult things are revealed which will take time to work through.  I love Ham's character.  He is loyal to a fault, honorable and brave.  He is a great leader and encouragement to his team and others. He and Signe have known one another since they were young.  Signe has a lot of shame and doesn't feel worthy of love.  She needs to feel safe and take time to heal.

Warren has written several series telling the stories of most of the other characters that show up here.    It is fun to catch up with what is going on in their lives.  The secondary story line this time is between Orion and Jenny who were the focus of The Way of the Brave, the first book in this series.

While I enjoyed this story, it didn't quite have the same "wow" factor that the other two books in the series do.  I think there was just so much that had to be sorted out that not as much time was spent in the aftermath of the volcano.  Overall, this was an enjoyable read that took me far away from my daily life.

"It looked like it had been a former apartment building, with an antique, gated elevator next to a stairway that circled up four stories.  The stairs ended at a terrace with rattan tables and chairs, gardenias in pots, and a view of the snow-covered Mount Etna in the background.  The volcano rose maybe forty kilometers away.  A tuft of smoke gusted from the mountain as if it might be breathing hard in the autumn wind."

"'I was hoping for chocolate.'  'Weren't we all.  But they're still good.  It is Italy.  Everything here is good.  It's just a matter of letting go of your expectations, letting your taste buds take you where they will.  You might be surprised.'"

"'I don't know if you believe in God, Orion, but you are never helpless when you are in God's hands.  God does not give us a spirit of fear but of power and love and self-control.  Which means we do not despair.  We do not let the enemy take control of our hope.  Hope is the weapon of the Lord, and right now we are going to wield it, in Jesus' name.'"