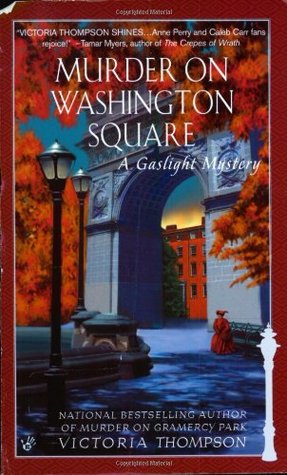 First Line: "Sarah opened the door to find a ragged little boy on her front stoop."

Summary:  Midwife Sarah Brandt is used to people knocking on her door, so when she opens the door to find a little boy there, she assumes someone is about to have a baby.  However, the boy has been sent with a message from Nelson Ellsworth, the son of her nosy neighbor.  He is requesting that Sarah meet him.

It turns out Nelson wants Sarah to examine a lady friend of his who is claiming to be carrying his child.  Nelson offered to marry the woman, Anna Blake, but she refused and only wants money so she can support herself.  When Sarah arrives at the boarding house where Anna lives, she refuses to see her.  The next morning Anna is found dead in Washington Square.

The number one suspect is Nelson Ellsworth.  Sarah does not think Nelson is capable of murder and she feels an obligation to her neighbor, Mrs. Ellsworth, to prove his innocence.  Sarah seeks the help of Detective Sergeant Frank Malloy.  Unfortunately he is not assigned to the case, but because he is a friend of Sarah's and will be forever grateful to Mrs. Ellsworth for saving Sarah's life, he agrees to look into the case.

My thoughts:  This series takes place in New York City just before the turn of the century.  It was a time when streets and homes were lit with gas powered lights, there was rampant corruption in the police department and Teddy Roosevelt was police commissioner. Every time I read a book in this series, I feel like I have been transported to a different time.

Sarah Brandt is a widow who supports herself by acting as a midwife.  She was raised by wealthy parents and taught the proper ways to act in society.  So, when she married Tom Brandt, a physician, and moved to the poorer side of town, her parents were not happy.  In fact, they still can't understand why she doesn't allow them to support her rather than spending her time amongst the dregs of society. Sarah and her parents have reconciled by this point in the series and she has a good relationship with them both that is healing and growing.  I admire Sarah's tenacity and her desire to help whoever needs her help regardless of class.

Detective Sergeant Frank Malloy is an unusual breed in the police department.  He refuses to take bribes and does his best to investigate crimes to find the culprit.  Unfortunately, at this time in history, that was not the norm. Frank is also a widower.  He lives with his young son and his mother who cares for his son while he works.  The more Frank and Sarah work together, the more they like one another.  However, neither of them is willing to admit they are beginning to care for the other. The blossoming romance is definitely not in the forefront, which I appreciate.  I enjoy their relationship, how they are able to work so well together.  As a detective who is good at his job, Frank knows how to handle criminals and sees deception a mile away.  Sarah lends a woman's intuition as well as a eye for details Frank might miss.  She also lends her medical expertise.

The mystery involves a woman who convinced more than one man that she loved him, was carrying his child and needed money.  It also involves the theatre world, which added an interesting twist. It also involves the press and how they could sensationalize a story and convince the public it was true, regardless of whether there was any truth to it or not. There is a lot to uncover before the mystery is solved, but there are plenty of clues along the way.

Fortunately, everything is wrapped up at the end.  However, a storyline that is carried through the series leaves us with a cliffhanger at the end.  I am so glad I won't have to wait for the next book to be published to find out what happens.

"'But they're newspapers! Don't they have an obligation to tell the truth? Mr. Pulitzer has devoted himself to covering scandal and corruption in society,' she said, naming the publisher of the World."

"Sarah dressed carefully for the evening.  She didn't care about trying to impress Mr. Dennis, but she didn't want to embarrass her mother. Elizabeth Decker placed great importance on appearances, and for all Sarah knew, so did Richard Dennis.  The suit she'd bought this past summer at Lord and Taylor wasn't the height of fashion, but at least it was presentable."

"'A father wants his children to have confidence in his abilities to handle difficult situations.'"

"Women usually had a dress, usually one past its prime, they kept for doing housework and such."