Book Review: I Capture the Castle by Dodie Smith 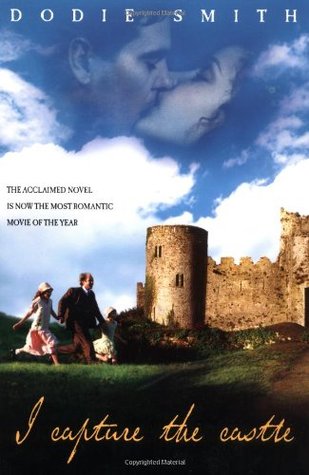 First Line:  "I write this sitting in the kitchen sink."

Summary:  Cassandra Mortmain's family inhabits the remains of a castle.  They live a lifestyle of extreme poverty mostly due to the fact that Mr. Mortmain hasn't worked for years. He is a writer suffering from writer's block, who encloses himself in the tower most days. No one is sure what he does in there, but hope that he is working on his next great book.  The rest of the family decide they must figure out a way to bring in money or they will starve.

The story is written as pages from Cassandra's diary. She describes the daily details of their lives, the beauty of the seasons, the eccentricities of her family, her hopes and dreams and when they are dashed.

My thoughts: I read One Hundred and One Dalmatians and The Starlight Barking to my children when they were young.  I will often recall scenes from one of those books.  Dodie Smith's writing, especially her descriptions of London and the night time, captivated me.  I Capture the Castle contains similar types of writing along with a great story filled with interesting characters.

Cassandra is a character you can't help but love.  She is seventeen and has been a bit sheltered.  She has a great relationship with her sister, brother and step-mother.  Also living in the castle is a young man who's mother was their maid until she died.  Stephen is very fond of Cassandra.  However, Cassandra is a bit oblivious to it.  It was fun to see her grow up in the pages of her diary. I will admit that some of the decisions she made in the second half of the book were puzzling to me.  I will just chalk it up to immaturity.

I always enjoy novels with daily details of life in them.  The story takes place between the wars and I found it interesting to discover how people lived during this time period. The family who owns the castle is extremely wealthy and the contrast between their lifestyle and that of the Mortmains was striking.

This was a pleasant read and one that I wouldn't mind rereading in the future.

"I suppose the best kind of spring morning is the best weather God has to offer. It certainly helps one to believe in Him."

"Then my brain began to pick out the bits it wanted to think about and I realized how the day made a pattern of clothes - first our white dresses in the early morning, then the consciousness of what people were wearing in London, then Aunt Millicent's poor dead clothes, then all the exquisite things in the shop, then our furs. I thought how important clothes were to woman and always had been."

"It is a tallish window with an arched top.  On the sill inside stood a straggly late hyacinth with its white roots growing in water, a jam jar of tadpoles and a hedgehog."

"When I told him we had neither a gramophone nor a wireless he looked staggered - I suppose Americans find it hard to believe there is anyone in the world without such things."

"I suddenly knew that religion, God - something beyond everyday life - was there to be found, provided one is really willing."

"I only want to write. And there's no college for that except life."

Email ThisBlogThis!Share to TwitterShare to FacebookShare to Pinterest
Labels: 52 Books in 52 weeks, classic, read in 2022