Book Review: In the Company of Cheerful Ladies by Alexander McCall Smith 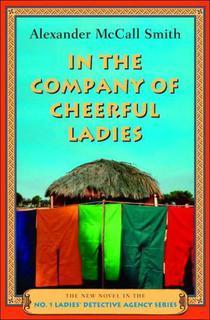 First Line: "Mma Ramotswe was sitting alone in her favourite cafe, on the edge of the shopping centre at the Gaborone end of the Tlokweng Road."

Summary: Mma Ramotswe's life is busy. She works hard at the No. 1 Ladies' Detective Agency as well as caring for her husband and two children.  So, when the opportunity for some relaxation presents itself, she is quick to take it. However, this particular time of relaxation turns into a time of panic when Mma Romotswe discovers an intruder in her home.  While she is trying to figure out how to handle this, other problems come up.  There is the situation with the mysterious pumpkin, the case of the missing trousers, the incident with the bicyclist and the appearance of someone from her past.

Mr. J.L.B. Matekoni always has more than enough work at the garage. He spends a lot of energy keeping his apprentices in line, which takes more time than it should.  So, when one of them runs off with a rich woman, work at the garage begins to pile up.  Fortunately, Mma Ramotswe and Mma Makutsi followed the rich woman's car.  Unfortunately, this only leads to another mystery.

My thoughts:  I think this was my favorite book in the series so far.  Maybe that is because I am familiar with the characters and setting.  Or maybe this story just flows really well.  Also, there are a couple of new characters added that I am looking forward to seeing in future books.

Mma Makutsi is taking a dance class where she seems to have been paired up with a man who is a terrible dancer.  Each time she returns to the class, she hopes to be paired with someone else, but each time she is paired with the same man.  As she gets to know him, she realizes there is more to him than his inability to dance.

As is always the case with this series, I appreciate the realness of the characters.  They believe in the goodness of the world and have high ideals, but they each have their own flaws.  McCall Smith has a gift for letting the reader see this without having to spell it out.  This is what makes the characters so likeable.

It is always good to catch up with the No. 1 Ladies' Detective Agency.  As we are left with a bit of a cliffhanger at the end of this installment, I am sure it won't be long until I am ready for another visit.

"There were many selfish people about these days, people who seemed not to care if they scraped the cars of others or bumped into people while walking on the street. Mma Ramotswe knew that this was what happened when towns became bigger and people became strangers to one another; she knew too that this was a consequence of increasing prosperity, which, curiously enough, just seemed to bring out greed and selfishness."

"They now had to put up with children who had not been taught the basics of good behaviour, and it was difficult in such circumstances for the teachers to maintain discipline."

"It was good to be able to share such things with somebody else; the little jokes of life, the little absurdities."