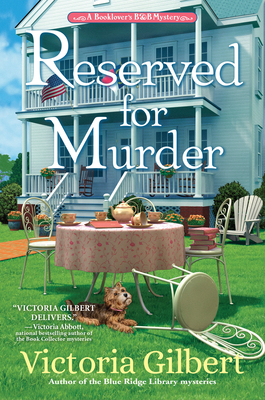 First Line: "When your neighbor is a retired spy, it's easy to imagine innumerable dangers haunting the house next door."

Summary:  Charlotte Reed, owner of Chapters Bed-and-Breakfast, is hosting a special event involving romance author Amanda Nobel.  Chapters will host Amanda and her publicist, along with three fans who have won the prize of spending several days with the author.  Immediately, Charlotte senses some tension between Amanda and her publicist.  Amanda complains about being worn out from book tours and really doesn't want to mingle with many fans.  However, she puts on a good act for the first event, which is a cocktail party hosted by Chapters including book group members, the guests at the B & B, and some friends invited by Charlotte.

During the question and answer portion of the evening, a man accuses Amanda of not doing her research before writing historical portions of her book.  Another man joins in grilling her and the atmosphere becomes tense.  The next evening, the five guests of Chapters go to dinner together.  But, only four return.  Charlotte is annoyed because she will have to be awakened to let the fifth guest in.  She decides to stay up and read, but soon falls asleep.  When she wakes up, the sun is rising.  She assumes that her housekeeper let the fifth guest in.  However, she soon receives a call from Detective Amber Johnson with some bad news.  The body of a young woman, Lisette Bradford, has been found in the water.  Lisette was the guest who didn't return last night.

My thoughts:  There is a lot going on in this book. There is the author who is staying at Chapters, along with her publicist.  Their relationship seems a bit hostile and strange.  Then there are the three other guests, who are fans of Amanda Noel's books.  One of them is head of a large fan club.  All of them seem to be "super fans".  Then there is Charlotte's neighbor, Ellen, the retired spy.  She has a guest, which is strange because she doesn't like overnight guests.  So who is this man really?

There are plenty of suspects for the murder, which makes it interesting.  Right up to the reveal, I wasn't sure who the murderer was.  The secondary story line involving Ellen and Charlotte's great aunt adds an interesting element.  We learn about some of the ways Ellen and Charlotte's great aunt worked together and I enjoyed that.  There is also a possible romantic interest for Charlotte introduced in this book.  Charlotte is not sure she is ready for a relationship, but finds herself wanting to get to know Gavin better.  However, he is not someone who lives in the area, so that will complicate things.  In the first book, there was some hostility on the part of Alicia, the housekeeper at Chapters, toward Charlotte.  They seem to be getting to know one another better and that was good to see.

Even though I was slow to warm up to this one, there was still plenty to like.  I will definitely be waiting for the third book in the series to see where that takes Charlotte.