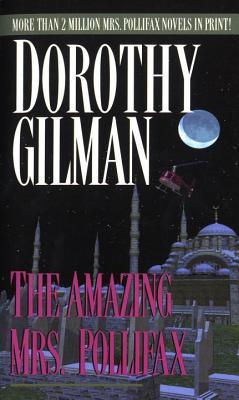 First Line: "Mrs. Pollifax had attended church that Sunday morning, and her hat - a garden of pale pink roses and green leaves - still sat on her head as she ate lunch in the sunny kitchen of her apartment."

Summary:  It has been several months since Mrs. Pollifax had returned from Mexico City and her stint as a spy.  Life had returned to normal.  So, when she received a call from Mr. Carstairs, she found herself overjoyed.  Mr. Carstairs wonders if she can be ready in thirty minutes.  Before receiving his call, she was not sure whether she wanted to help out again.  Her pulse quickens as she hears herself say, "Yes, I can be ready in thirty minutes."

This time Mrs. Pollifax is headed to Istanbul, Turkey to try to make contact with a spy being accused of being sympathetic to Communists.  The spy, Magda Ferenci-Sabo, is a woman near Mrs. Pollifax's age, whose whereabouts have been unknown for quite some time.  Mr. Carstairs is taking no chances and sends a bodyguard with her that she is not to speak to under any circumstances.  Well, things do not go smoothly once they arrive in Istanbul.  Mrs. Pollifax won't give up until she has rescued Magda and returned her to safety.

My thoughts:  Whether at home attending gardening club meetings and making grocery lists or in some exotic location rescuing people, time spent with Mrs. Pollifax is always enjoyable.

This time she is sent to Istanbul, Turkey.  Mrs. Pollifax makes friends wherever she goes and this time she connects with the brother of a young lady she met on the airplane.  After Mrs. Pollifax visits Colin, he becomes her almost constant companion.  Mrs. Pollifax often shocks Colin with the things she is willing to do or when he learns that someone is after her.  I enjoyed their relationship and the way they respected one another, but could also tease one another.

The plot involves trying to make contact with Magda Ferenci-Sabo without anyone noticing.  This is not easy and there are many people who are trying to locate Magda.  Mrs. Pollifax has not been given much information, only that she is to locate her.  She has been given strict orders not to talk to the man who is following her as protection.  Mrs. Pollifax often is just not sure what to do, which leads to some humorous and interesting situations. She winds up being aided by some gypsies who escort her through the desert.  It was interesting to see the inner workings of this group of people.  The wanderings through the desert were vividly described and left a clear picture in my mind.

"It was incredible country: the moonlight picked out whole forests of needle-shaped rock, a valley of rock chimneys arising white under the moon, a cluster of cone-shaped hovels like beehives."

One evening Mrs. Pollifax takes some time to reflect:

"...I must remember this moment, and then, I shall have to come back and really see this country.  Yet she knew that if she did come back it would be entirely different.  It was the unexpected that brought to these moments this tender, unnameable rush of understanding, this joy of being alive."

Whether you are looking for edge-of-your-seat suspense, beautiful scenery or reflections on a life lived well, you will find it all in a Mrs. Pollifax novel.  I look forward to her next adventure.