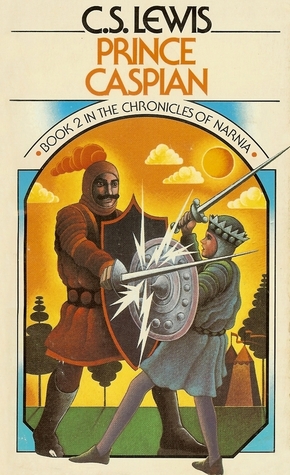 First Line: "Once there were four children whose names were Peter, Susan, Edmund and Lucy, and it has been told in another book called The Lion, the Witch and the Wardrobe how they had a remarkable adventure."

Summary:  The Pevensie children are summoned back to Narnia by Susan's magic horn.  Prince Caspian is the rightful heir to the throne, but his uncle Miraz has declared himself king.  It is up to Peter, Susan, Edmund and Lucy with the help of Aslan, to bring the magic back to Narnia and put Caspian on the throne.

My thoughts:  This one is such an adventure!  As the Pevensies journey through the land, discovering talking beasts that are in hiding, they begin to change.  They become braver and more noble.  They more quickly recognize when they are being unreasonable and want to do better.  I loved this aspect of the story.

The characters are wonderful.  Trumpkin, the Red Dwarf or D.L.F (Dear Little Friend) with his silly exclamations - "Whistles and whirligigs!" or "Wraiths and wreckage".  The Bulgy Bears who would rather just have a nap.  Reepicheep, the valiant mouse.  The Giant Wimbleweather who is large, but not very wise.

The four children play a much larger role in this one working together to put Caspian on the throne.  This is a great follow up to The Lion, The Witch and the Wardrobe.