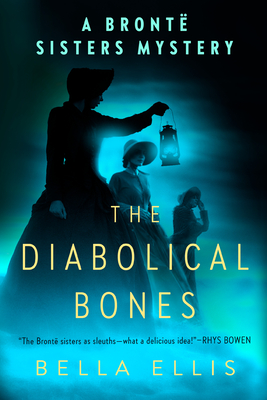 First Line: "Charlotte could not conceive of a place more beautiful than Haworth and the surrounding countryside in the spring."

Summary:  Top Withens Hall lies atop a hill above the moors.  Clifton Bradshaw and his son Liston make their home there.  After Mrs. Bradshaw passed away thirteen years ago, Clifton sealed off her upstairs bedroom and can't bear to go in there again.  Until one night when he is awakened by a scream.  Clifton has taken to drinking since his wife's death and sometimes seems out of his mind.  On this particular night he is mad with rage, begging the screaming to stop.  His son Liston follows him to the closed off room.  They discover that a window has been broken.  In an effort to get the screaming to stop, Clifton begins tearing apart the chimney.  Hidden in the walls of the chimney, Clifton discovers the remains of a child.

When the Bronte sisters hear of the incident, they at once feel the need to visit Top Withens Hall.  They have heard that Clifton Bradshaw intends to leave the remains out in the weather until spring comes.  The sisters feel this is a disgraceful way to deal with remains and feel that they should be given a proper Christian burial at once.  Clifton refuses to let them have the remains.  However, Liston decides to help the sisters retrieve them.  Once they have retrieved the remains, they make arrangements with their father to have them properly buried.  However, there is one problem.  No one seems to know who the remains belong to.  There are rumors that Clifton sold his soul to the devil, perhaps he murdered the child.  As they begin to investigate, the case becomes more complicated than they imagined.

My thoughts:  This series is quickly becoming one of my favorites.  The overall tone of the books is uplifting, even though they deal with difficult situations.  There is a bit of humor here and there that helps alleviate the heaviness of the story.

I really enjoy getting to know each one of the Bronte sisters and their brother, Branwell.  The author has done a great job of distinguishing each of their personalities.  Before starting this series, I knew very little about the Brontes, but now I want to learn more.  This book contains an author's note, which is something I always look forward to.  Ms. Ellis has clearly done a lot of research.

Besides the characters, the other thing I enjoy is the gothic atmosphere of the novels.  The author gives us a feel for the damp and cold of the moors, the fog settling over everything and the cold wind that blows in the winter. There is also the old Victorian homes with closed off rooms and strange sounds.  Add to this the possibility of something supernatural, a witch or visionary and some ancient, cryptic writing and you have an atmosphere that gives you the chills. But right along with all the creepiness you have the sisters who have been raised in the Christian faith reminding themselves and the reader what they believe is true.

The mystery is a difficult one since the death occurred many years ago.  The sisters use some interesting techniques to help them out in the days before the internet.  They make drawings to compare with pictures in books and consult people who have studied the topic they are interested in.  The thing that starts them on the investigation is that they want a name to put on the headstone of the remains.  Along the way they uncover secrets and hit some dead ends. But eventually, things become clear.  I didn't identify the killer until they were right in front of my face.

If this series is new to you, I would recommend you start with the first book in the series, The Vanished Bride.   You could read this as a stand alone, but you would miss some of the character growth and the storyline continued from the first book. This is an enjoyable series with strong characters, a great atmosphere and interesting mysteries.

"Anne smiled; despite the grave circumstances, it was uplifting to see the simple pleasure the dog took in life.  It gladdened her heart to remember that for every dark corner and unjust hurt in the world, there was a place of light, hope and goodness.  Ensuring the latter outweighed the former was surely every person's greatest task on this earth."

"'Emily is quite correct: it is time, my son, to return to your life.' Patrick broke the moment, his tone kind but stern. 'You have suffered pain, but the pain you have suffered is of your own making. You may have peace, happiness and your own home, but not without accepting your responsibilities.'"