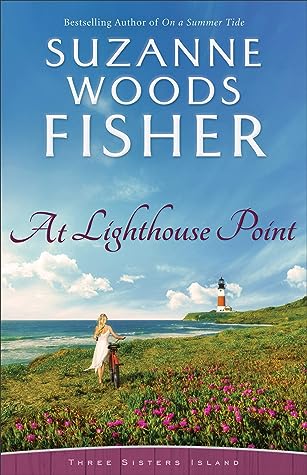 First Lines:  "It was a long way home.  Blaine Grayson stood on the bow of the Never Late Ferry to fully appreciate this moment of coming home, breathing deeply of the salty ocean air, listening to the screech of seagulls, the hum of the lobster boat engines as they chugged toward the dock with the day's catch."

Summary:  Two years ago Blaine Grayson left Three Sisters Island for Paris.  She needed to put some space between herself and her family.  Her dad and two sisters were all living on Three Sisters Island and had begun to build lives for themselves there.  Her dad had realized his dream of reopening Camp Kicking Moose and her two sisters had recently married.  Blaine needed to find her place in the world.

Now she is returning to Three Sisters Island.  Blaine had always loved cooking and was often praised for her skill in the kitchen.  While she was away, she had the opportunity to attend Le Cordon Bleu and become a chef.  Now she is looking forward to redesigning the kitchen at Camp Kicking Moose and beginning full service dining for the campers.  But when she arrives, things are not as she expected.  Things have changed.  People have changed. Her dad and her sister went ahead and had the kitchen redone as a surprise for her.  The only problem is, they had no idea what needs to go into a commercial kitchen and didn't bother to find out.  Blaine is disappointed, but doesn't want to express her disappointment to her family.  Instead, she makes excuses for spending her time elsewhere.  Will Blaine be able to make her family see that it will be impossible to use the kitchen to serve guests of the camp?  Does she truly belong on Three Sisters Island?

My thoughts:  The Three Sisters Island series is filled with great characters, lots of family drama and a setting that is memorable.

The focus of this story is Blaine.  She is the youngest of three sisters.  As the story opens, we know that she is returning after having been away for two years.  She is excited to return and has brought a friend with her.  The friend is a young French man whom everyone assumes is her boyfriend.  It is only as the story unfolds that we learn her true relationship with him.  I really like Blaine's character in this story.  In the previous two books, I sometimes felt she was a bit immature.  She has definitely grown and continues to grow throughout the story.

All of the regular characters from the previous novels return as well and each of them continues to grow.  The family has some difficult circumstances to work through and I loved watching them interact.  There are a couple of new characters this time as well.  Jean-Paul, the young French man that came home with Blaine and Walter Grayson, Blaine's grandad, who has been estranged from the family for many years.  Poor Jean-Paul seems to be very accident prone and becomes thoroughly unFrench while visiting.  Walter Grayson is very secretive as to why he has come and how long he intends to stay. There is some romance in the story, but it is not the focus.

Some of the themes include managing our expectations, accepting circumstances that come into our lives, the power of prayer, recognizing our gifts, and finding the right balance between work and rest.

Suzanne Woods Fisher is an amazing writer who always leaves me pondering what I have read.

"She loved this moment!  It made her feel terribly insignificant to face the power of the open sea, and yet also full of awe.  So filled with the intense awareness that she was in the presence of something greater than herself."

"She hadn't seen Maeve since Christmas and was happy to see she looked just the same.  Maeve never changed, and Maddie was so grateful for that.  Grateful for everything about her mother-in-law.  Her strength, her solidness, her faith.  Calm and comforting."