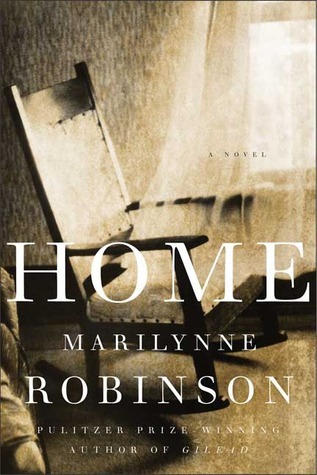 Summary:  Reverend Boughton is well-advanced in years and is becoming more feeble each day.  Glory is the youngest of the eight Boughton children.  After her life fell apart, she returned home to care for her father.  Jack, the black sheep of the family, returned as well. He and Glory begin the work of getting to know one another while caring for their father and keeping him happy.

My thoughts:  I read Gilead last year and really liked it.  This story runs concurrently with Gilead. Gilead is the story of John Ames and a letter he is writing to his son.  John had his son in his old age and he is afraid he will not be able to tell him all the things a father should tell his son.  John Ames and Reverend Boughton are best friends.  They have known one another for as long as they can remember.  In Gilead, we heard about Glory coming to care for her father and that Jack was visiting.  It was interesting to read about these things from a different point of view.  But, I can't say that I liked this one as well as I liked Gilead.

Glory has come home to care for her father.  She knows he is not long for this world and he requires more assistance each day.  But, since the relationship she was in fell apart and she no longer has a job, she really had no other place to go.  She loves her father and is glad to be able to help him.

Jack was always the child that went off by himself.  He rarely participated in what the rest of the family was doing.  Everyone always walked on eggshells around him because they were afraid if they upset him, he would leave.  As he got older he stole things, drank and had a relationship with a young woman that produced a child.  He never took any responsibility for that child.  Jack has been a worry to his father for years.  So when the Reverend receives word that Jack is coming home, he is cautiously optimistic.  He has been let down so many times, that he can't allow himself to become too excited about the possibility of Jack returning.  But, Jack does return.

In many ways this book was uncomfortable and difficult to read.  As a reader, you could feel the tension in the atmosphere.  This speaks to the brilliance of Marilynne Robinson's writing.  Of the three, Glory is the most honest character.  She is uncomfortable around Jack, but only because she doesn't know him well.  She takes him as he is and thinks well of him.  She is always eager to help him.

Most of the time I wanted to shake Jack.  He is constantly concerned with himself and what others think of him.  I guess maybe he has reason to be.  He knows he has been a worry to the family, but he claims he can't help what he does.  His lack of personal responsibility was frustrating.  One good thing I can say about him was that he seemed to be remorseful and he was very polite.

Reverend Boughton loves Jack deeply.  But he is constantly giving him backhanded compliments.  He will compliment him while also jabbing him.  He feels like he has let him down as a father.  It is not surprising that a minister would have high expectations for his children, but it is clear that several of the children present themselves as the people they think their father wants them to be, while not being so lily white in reality.  Some of them felt the pressure to live up to these expectations, but felt they couldn't.  I'm not sure that Reverend Boughton saw his children for who they really were.

But, ultimately, I think Jack did want to change.  He just wasn't sure how to do it.  He was one of those people who feels things deeply and this is what made him run away or drink. He couldn't bear to be hurt, so he fled even when he knew this would hurt those he cared about most.

This is a complicated and moving story.  While I didn't like it as much as I liked Gilead, I have a feeling it's going to stick with me for a while.

"She went off to help her father put his socks on and shave and get his shirt buttoned, and  she thought, as she often did, At least I know what is required of me now, and that is something to be grateful for."

"It's television that makes things seem important, whether they are or not."

"Her father had always said, God does not need our worship.  We worship to enlarge our sense of the holy, so that we can feel and know the presence of the Lord, who is with us always."

"Still, there was something strained about it all, as if time had another burden, like humid air, or as if it were a denser medium and impervious to the trivialization which was all they would expect or hope for on an evening like this one, now that grace was said."

"He looked like a man full of that active contentment that makes even ordinary movement graceful."

Email ThisBlogThis!Share to TwitterShare to FacebookShare to Pinterest
Labels: 52 Books in 52 weeks, Fiction, Literary Life 19 for 2021, read in 2021