Book Review: The Murder of Roger Ackroyd by Agatha Christie 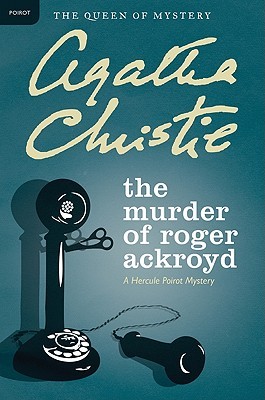 Summary:  The Murder of Roger Ackroyd begins with the death of Mrs. Ferrars.  She presumably died of an overdose of Veronal.  However there are rumors it was suicide.  Dr. Sheppard, our narrator, receives a good dose of the King's Abbot rumor mill from his sister Caroline.  And she insists it had to be suicide.

That evening Dr. Sheppard is summoned to the home of Roger Ackroyd by a phone call asking him to come quick because Roger Ackroyd has been murdered.  However, upon arrival, he finds no knowledge of such a call.  Mr. Ackroyd has asked not to be disturbed and no one has disturbed him.  Dr. Sheppard breaks down the door to  the study and finds the man slumped over in his chair with a dagger in his neck.  Who made the call to alert Dr. Sheppard of Mr. Ackroyd's death?  Is there a connection between Mrs. Ferrars death and the death of Roger Ackroyd? Where is his nephew who is always asking for money?  There is much to investigate, so it is a good thing Hercule Poirot has retired to the village of King's Abbot.

My thoughts:  I will not soon forget this cleverly plotted mystery.  I loved following the trail of clues along with the diagrams and was quite surprised by the ending.

Dr. Sheppard is the narrator of the story, which gives it a unique perspective.  Hercule Poirot is involved, but most things are seen from Dr. Sheppard's point of view.  I enjoyed his relationship with his sister Caroline and his attitude toward her tendency for gossip.

"Whatever I told Caroline now concerning the demise of Mrs. Ferrars would be common knowledge all over the village within the space of an hour and a half.  As a professional man, I naturally aim at discretion.  Therefore I have got into the habit of continually withholding all information possible from my sister."

There are plenty of suspects along with plenty of secrets to uncover.  As Hercule Poirot says,

"Yes, yes, I know what I am saying.  It may be something unimportant - trivial - which is supposed to have no bearing on the case, but there it is.  Each one of you has something to hide.  Come now, am I right?"

This fact makes for red herrings and dead ends galore. As always, I love Poirot's methodical processing of the information and clues.  He has taken on Dr. Sheppard as his assistant since Hastings is in Argentina.  Dr. Sheppard does a good job of documenting the case which impresses Poirot.  The story includes a list of everyone in the house at the time of the murder and their location as well as a couple of diagrams of the home.  I found it very easy to keep track of the suspects and their locations at the time of the murder, which is not always the case.

I can see why The Murder of Roger Ackroyd is considered one of Agatha Christie's best works.  It is included on numerous lists of "best" books as well as must read books.  If you haven't read it, I encourage you to give it a try.