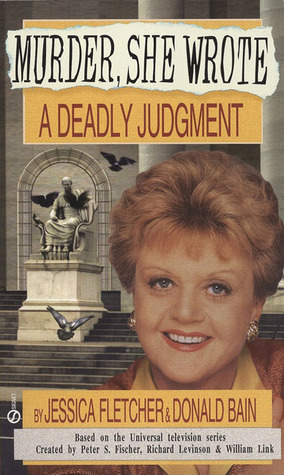 First Line: "I saw it as a speck on the distant horizon, a tiny insect hovering in the hot haze of the day."

Summary:  Jessica has agreed to help her attorney friend, Malcolm McLoon, by serving as a Jury Consultant on his latest case.  This means that she will be spending several weeks in Boston, a city she loves.  However, being away from home for several weeks isn't ideal.  Her publisher, Vaughan Buckley, has suggested that her next book should revolve around a murder trial.  So, Jessica sees the opportunity to serve as a Jury Consultant as research for her next book.

The case Malcolm McLoon is handling involves a wealthy man accused of murdering his brother. There is no solid evidence against him and he has an alibi for the time of the murder.  However, when his alibi is murdered, Jessica begins to wonder if she is in over her head.

My thoughts:  One of my favorite things about this series, aside from Jessica, is visiting cities around the country that I have never visited.  This time Jessica is in Boston.  I learned so much about the city from reading this book.  It was not a place that topped my list of places to visit, but this book has certainly  moved it up.  Jessica is fortunate to be staying at the Ritz-Carlton in a room with a view of the Public Garden.  Mr. McLoon has spared no expense in regards to her stay.  She is invited to have dinner at many wonderful restaurants, is provided with a driver and enjoys some free-time to explore the city.  Boston is familiar to her as she attended college there.

"I'm an unabashed Boston lover. To me, it's the closest thing America has to a European city, which is how I usually describe it to people who've never been there.  It's the most civil of cities, quaint, charming, superb food, plenty of culture and intellectually stimulating."

I learned a lot about the process of jury selection and court proceedings.  Malcolm McLoon has asked Jessica to help with the jury selection process.  He believes that as a writer she is very good at reading people and notices things that others wouldn't.  This made sense to me.  She also sat in on some of the court proceedings.  But, in order to keep things interesting she does take some days off for exploring and investigating.

The original mystery, of who killed the accused's brother, was just the tip of the iceberg.  There were plenty of people with things to hide and a tangled web to unwind before the mystery was solved.  It was hard to know who to trust, even for Jessica.

The one complaint I have is that the book contained many editing errors.  Other than that, I enjoyed this unique Murder, She Wrote installment.