Book Review: The Scent of Murder by Kylie Logan 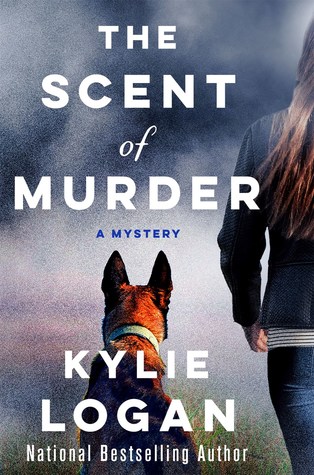 First Lines: "It had rained that afternoon and the sidewalks were still wet.  When the last of the evening light hit them, the slate squares reflected Jazz Ramsey's neighborhood - streetlights, and the neon signs that flashed from the windows of the trendy pubs, and a watery rendering of St. John Cantius church, an urban Monet masterpiece, its tan brick walls and bell tower blurred."

Summary:  Jazz Ramsey spends her days working as an administrative assistant to the head of an all-girls school.  In her free time, she trains human remains detection dogs. She is a little out of practice as it has been several months since her dog, Manny, passed away.  Tonight she is training the dog of a friend.  She has gained permission to use an abandoned building that will soon be turned into upscale apartments.  Now, it is the perfect place to train a dog to detect human remains.  Before bringing the dog over, Jazz hid a human tooth in a room on the third floor.  Jazz is excited to see what her friend's dog, Luther, can do.  She gives the command for him to begin the search.  She is impressed with his ability. He is fast and thorough.  So, Jazz is surprised when Luther alerts that he has found human remains in one of the last rooms on the first floor.  Jazz knows she put the tooth on the third floor.  She begins to get a sinking feeling as she catches up with Luther.  Unfortunately, Luther has not made a mistake.  He has discovered the dead body of a young woman. When Jazz first sees the body, she thinks it might be a mannequin, but as she gets closer, she realizes the woman has thick white makeup on.  She also realizes she recognizes her.

My thoughts: I was immediately drawn into this story and the life of Jazz Ramsey.  The way she spends her free time is unique, but I also loved that her daytime job was as an administrative assistant.  She is a woman who is used to paying attention to details and this makes her especially well suited for detection work.

As the story unfolds, we effortlessly learn about her past.  She recently lost her father, who was a firefighter and was killed in the line of duty. Her mother and brothers live nearby and they are a close family who is still grieving.  Her dad also trained dogs, but he trained them in search and rescue.  His dog is retired and still lives with her mom.

As the police arrive at the abandoned apartment building, we are introduced to Detective Nick Kolesov.  Jazz also has a history with him.  They dated for a while, but that was months ago. They couldn't seem to make things work. As Jazz sees him again, she can't help but remember some of the good times they had and what it was like not to spend every evening alone.  Nick also seems interested in seeing her again.

Some of the other supporting characters are great as well.  Her best friend, who teaches art at the all- girls school, Sister Eileen, who runs the school and Loretta Hardinger, who is in charge of the cafeteria at the school, are all people I would like to get to know better.

The mystery is excellent with lots of secrets to uncover. Jazz involves herself because she thinks that if she is just able to figure out what happened, it might ease the pain of finding the dead girl.  Detective Kolesov is usually several steps ahead of her, which I found to be a good thing. While the young woman who was murdered seemed to be well liked, she also had some enemies and had taken up some unsavory practices which led to plenty of suspects.

I enjoyed the way the author gave the reader a taste of the Cleveland area.

"But then, there was a lot about Tremont that was a little different from the rest of Cleveland.  The neighborhood had once been home to thirty-six different churches, and the why of it was no surprise - many of the immigrants who flooded the area to work in the nearby factories kept the customs and the languages of their home countries. They stayed within their own ethnic groups and, street by street, the South Side grew up around them."

Another series I am reading also takes place in Cleveland, but in the Asian section.  This is a totally different perspective and gives me a wider view of a part of the country I have never visited.

The Scent of Murder was a great start to a series I look forward to reading more of.