Book Review: The Hawk and the Dove by Penelope Wilcock 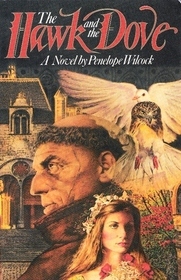 First Lines: "I wish you had known my mother.  I remember, as clearly as if it were yesterday, toiling up the hill at the end of the school day, towards the group of mothers who stood at the crest of the rise, waiting to collect their children from the county primary school where my little sisters went."

Summary:  When Melissa was fourteen years old, her mother would tell her and her siblings stories of her ancestors.  The stories had been told to her mother when she was a girl by her Great-Grandmother.  Many had been handed down in the family for more than 700 years.  These stories were told by Edward, a Benedictine Monk who lived in monastery on the edge of the Yorkshire moors.

He had spent forty years as a wandering friar.  Around the time of his sixtieth birthday, he entered the community of Benedictines at St. Alcuin's Abbey.  He was made the infirmarian of the Abbey.  He had some knowledge of tisanes and poultices gained during his time of wandering, which he was able to use in healing the sick and caring for the old at the Abbey.  He met many interesting men during his time at the Abbey and when he was old, he loved to tell their stories.  These are the stories that have been passed down for more than 700 years.

My thoughts:  I had heard about this series years ago and wanted to read it, but never pursued purchasing it.  I recently came across the series at a used book store and was quick to buy it.  The Hawk and the Dove is the first book in this series.

The book is narrated by Melissa who is looking back to the time in her life when she was fourteen years old.  She was the second of five children.  There is a large gap between the youngest three children and Melissa.  During this time of her life, her mother would often tell the children stories in the evening after dinner.  Melissa began to really look forward to the stories her mother told about Uncle Edward and his brothers at the Abbey.

The majority of each chapter is a story taking place at the Abbey.  Most chapters begin and end with life in Melissa's home.  This was enjoyable and I looked forward to both.  Melissa has a loving family that expects her to help around the home.  One of her younger sisters is a handful and I appreciated how the older members of the family helped out with her care and made adjustments to their lives in order to make things run more smoothly for everyone.

I loved the atmosphere of the Abbey.  Each of the men we encountered had room for growth in his life.  If they entered the Abbey full of themselves, they often learned rather quickly that was not going to get them far.  There are rules that every member of community must follow.  One of them was that if you wronged another person, you were expected to ask forgiveness formally.  This often meant in front of the entire community.  Often it was the Father or Abbot that would determine what was necessary.  This process was extremely humbling, but also very freeing.  Rather than bearing guilt and shame for something done wrong, it was confessed and forgiven and forgotten.  Each of the stories told shows great strength of character.

I enjoyed getting a glimpse of what daily life would have been like in a monastery.  I have always been fascinated by Benedictine monks and their lifestyle.  This story made that come alive, along with showing that these men were real people, who struggled with the same things men struggle with today.

There are two more books in this series and I am looking forward to spending more time at St. Alcuin's Abbey.