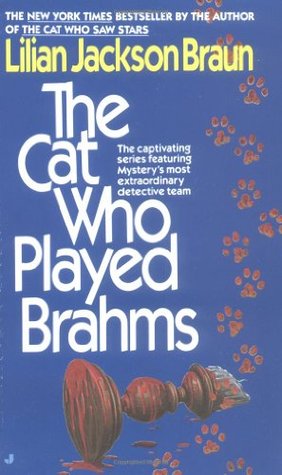 First Line: "For Jim Qwilleran, veteran journalist, it was one of the most appalling moments of his career."

Summary:  Qwilleran has made a decision.  He needs a break from city life and all that it entails.  He is going to use some vacation and take a leave of absence and spend three months up north.  He has an aunt, well she's not really an aunt, but a friend of his mother's that he calls Aunt Fanny.  She has a cabin up north that she will let him use.  His friend, Arch Riker, thinks he's crazy and wonders what he will do up there.  Qwill has some ideas for a book and intends to spend his days writing.

Aunt Fanny is eccentric.  She has a deep voice and usually dresses flamboyantly.  Qwilleran hasn't seen her in forty years and she is overjoyed to see him.

Aunt Fanny's cabin is more rustic than Qwilleran expected, but he and the cats will make the best of it.  Right away strange things begin happening.  The cats stare out the window toward a spot on the beach that looks like a grave.  Qwill is awakened in the middle of the night by what sounds like loud footsteps on his roof.  One day he returns to the cabin and catches a whiff of pipe smoke inside and finds a few small things missing.  As he tries to get to know the locals and discover if anyone else has noticed odd occurrences, he is met by closed lips and blank stares.

When a local artisan is found dead in his workshop, Qwilleran realizes something strange is going on.

My thoughts:  This story is full of quirky characters and strange occurrences.

Jim Qwilleran is tired of city life and the crime, pollution and noise that accompany it.  Qwilleran was married, but is now a confirmed bachelor and mostly prefers it that way.  He has his habits and routines and his cats.  He rarely cooks, preferring to visit nearby establishments for sustenance.  However, he always feeds his cats meat, whether fresh or canned.  He has recently been writing restaurant reviews for the Daily Fluxion, which was a definite step down for him.  He has been spending time with Rosemary, who is much older than he is, but she is good company.  I like Qwilleran.  His life is predictable and he likes it that way.  So, it is a bit unsettling when he decides to leave the city and go up north for a few months.

It is even more unsettling when he meets Aunt Fanny.  She is eccentric and has a hard time staying focused.  Then there is Tom, who seems to be her right-hand man.  But he is quiet and slow and a little creepy. Sometimes he just shows up inside the cabin.  Aunt Fanny says nobody locks there doors here.  Many of the locals are a little strange and not very friendly.  Qwill's nerves are on edge and he can't decide if his mind is playing tricks on him or strange things are really happening.

It is not until halfway through the book that the murder occurs, but then the mystery intensifies.  It was a good mystery with a twist.  As usual, Koko the cat, knows who the murderer is before Qwill does and tries to alert him.  I enjoy the way the cats are involved.  They always have some means by which they try to point something out to Qwill.  It is not magic, but something like flipping a light switch or opening a book to a certain page, or playing Brahms.

There was a fortune teller in this story, but she wasn't taken seriously.  She was a resident of the town up north and tried to tell everyone's fortune whether they wanted her to or not.

This is an enjoyable addition to the series and I look forward to the next installment.

"On the other hand, Aunt Fanny had mentioned nothing about comforts and conveniences.  Qwilleran liked an extra-long bed, deep lounge chairs, good reading lamps, a decent refrigerator, plenty of hot water, and trouble-free plumbing."

"The little old lady who answered the doorbell was undoubtedly Aunt Fanny: a vigorous eighty-nine, tiny but taut with energy.  Her white, powdery, wrinkled face wore two slashes of orange lipstick and glasses that magnified her eyes."