Book Review: Salvation of a Saint by Keigo Higashino 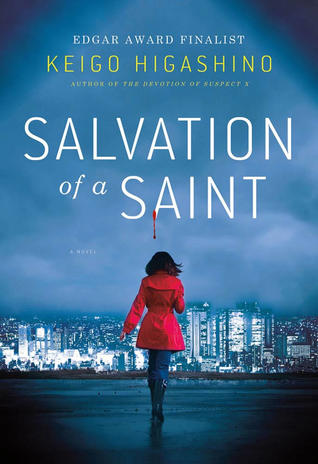 First Lines: "The pansies in the planter had flowered - a few small, bright blooms.  The dry soil didn't seem to have dimmed the color of the petals."

Summary:  A man has been found dead in his locked home.  The woman who found him is an apprentice of the man's wife.  She was given a key to their home when the wife went to visit her parents in another town.  When she was unable to reach the man by phone, she became worried and went to the house. She found him on the floor in the living room near a spilled cup of coffee.

Detective Kusanagi has been assigned to the case.  When he arrives on the scene Junior Detectives Utsumi and Kishitani have already arrived.  The ambulance has already been there and a doctor has examined the victim.

"That's when they decided there was something suspicious about it and called the precinct...and here we are."

It looks like the man was poisoned.  But was is suicide or homicide?  As the team begins to investigate, they keep hitting dead ends.  If this isn't suicide, how was the man poisoned and who did it?  Eventually Utsumi contacts Professor Manabu Yukawa, referred to as Detective Galileo by the department.  His specialty is physics, but as a scientist his interest is sparked when the police department presents him with an impossible case.  The detectives need proof and Yukawa is just the man to help them find it.

My thoughts:  This is the second book I have read by Higashino.  I really like his straight-forward writing style.  His mysteries are puzzles that are worked through step by step without a lot of fluff.  That is not to say that there aren't secrets to be discovered or trails leading no where to be followed.  The main characters become known to us through their detective work and interaction with one another.  We don't spend a lot of time with them outside of work.

This mystery is unique in that the reader is made aware of who the killer is at the end of the first chapter.  Or at least we think we know.  This is a locked-room mystery.  So the detectives really have to use their "little gray cells" to determine how the murder was committed and who had motive and means.

The victim was a despicable man whose only goal in life was to produce a child.  If a woman he was with didn't become pregnant, he ditched her and moved on to someone else.  He had clearly made many enemies.

I really enjoyed working through the clues with the detectives.  Especially, the scientific processes gone through by Detective Galileo.  He is always willing to test things out and encourages the detectives to clear their minds of preconceived notions.  Sometimes we see what isn't really there because we believe it is there.

Reaching the end of this novel was thoroughly satisfying.  I felt like I had battled my way through the evidence, or lack thereof, with the detectives and reached a conclusion.  I didn't come up with the method before the detectives did, but it was enjoyable working alongside them.

"Kusanagi had met plenty of good, admirable people who'd been turned into murderers by circumstance.  There was something about them he always seemed to sense, an aura that they shared.  Somehow, their transgression freed them from the confines of moral existence, allowing them to perceive the great truths of the universe.  At the same time, it meant they had one foot in forbidden territory.  They straddled the line between sanity and madness."

"The physicist reached out and retrieved the piece of paper off the table. 'It's a habit we scientists get into,' he said. 'Even if the solution to a problem is imaginary, we can't rest until we look into it. But, of course, you're a detective, not a scientist.  You can't be wasting your valuable time proving something's impossible.'"

I read this as part of Japanese Literature Challenge 14.