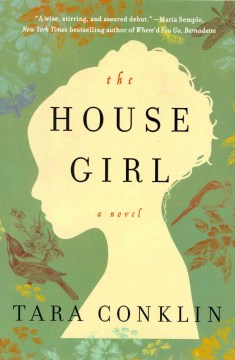 First Line:  "Mister hit Josephine with the palm of his hand across her left cheek and it was then she knew she would run."

Summary:  Carolina Sparrow is in her first year working for a law firm in New York City.  She works hard, always going above and beyond what is asked of her.  Like many associates, she has dreams of one day becoming a partner.  So, when her boss comes to her with  a new case, a big case, she can't say no.  The case is unusual.  A large oil and gas company is making a historical reparations claim against twenty private companies that benefited from slave labor.  The claim is on behalf of the ancestors of the slaves.  Carolina's boss readily admits it is mostly for publicity.  However, this is a big client and they pay well, so the firm will do their best for them.  Carolina is assigned to find an ancestor of a slave to be the face of this case.  Not just any face, but one that is photogenic and has a compelling story.

Josephine Bell is a slave living on the Bell Creek Plantation in Virginia.  She was not born there, but she remembers no other place.  Missus Lu keeps Josephine close.  She sends others on errands, but relies on Josephine to do the work in the house.  Missus Lu is good to her, but Master treats her and the other slaves poorly.  Josephine tried to run once, but was forced to come back.  She is determined to try again.  It is all she can think about.

When Carolina learns about Josephine, she is sure that one of her descendants would be the perfect face for their case.  But, did Josephine have descendants?  The two women's stories intersect in ways Carolina didn't imagine.

My thoughts:  This story is told in a way that flows peacefully through your mind.  The author's writing style fits the time period and characters.  Her use of different characters to tell different parts of the tale is unique.  Most of the story is told in prose, but parts of it are told through letters.  This makes the people and their stories come alive.

Carolina, who is called Lina by most people, still lives with her dad in the same house she grew up in.  Her mother died when she was young and she and her dad never spoke of it again. Lina always assumed this was because it was too difficult for her father.  However, he has begun to paint pictures again and he is painting her mother.  Lina is not sure how she feels about this.

"The difference between how Lina saw the world and how it truly was seemed suddenly vast and breathtaking, and Lina felt again as if she were four years old, mystified by a loss she could not control and events she did not understand."

During the course of the novel her world is expanded by people and circumstances in her life and by people she meets through words on a page.  She grows and matures in positive ways.

Josephine Bell is a deep character who has endured much in her short life.  We are transported to Bell Creek Plantation and can feel the heat and dust along with the characters.  Josephine is fortunate because she has been chosen as the house girl.  This means that rather than spending her days in the field, she spends them in the house.  She looks after Missus and cooks and cleans.  But she is still a slave and longs for freedom.

Part of her story is told by the daughter of a man who assists the Underground Railroad.  It was really interesting to get this perspective.

Many of the characters struggle with faith.  They are all trying to reconcile a good God with the loss and pain and affliction experienced in their lives and the lives of those around them.

The book contains some language and hints at abuse.  Nothing is graphic or excessive.

I enjoyed walking along with Lina as she navigates her relationship with her father and as she conducts research for her job.  I learned a lot about what life was like in the south leading up to the civil war.  If you like historical fiction woven with a modern timeline, give this book a try.

"It seems an impossibility - that a woman is so beloved by a man, who together bore & raised a child, & yet that same man would deliver upon that same woman such cruelty & pain.  Perhaps you think me naive.  But what God could allow such a thing to transpire? The weight of the things I do not understand would crush an ox."

"Our small chapel still echoes with the tones of Pastor Shaw's sermon delivered this Sunday last.  It was a deeply affecting lecture, Kate, one that I continue to ponder even now three days gone.  He spoke on the universal sanctity of life, how the taking of life regardless of the station of the person will always be viewed as sin before God, that all men yearn for life & its natural corollary, freedom."

"The studio was at the front of the house, four long steps from the door of Missus' room, with windows that looked west to the foothills of the Blue Ridge Mountains, the low mounds sloping soft as though drawn with a crumbling crayon."