Book Review: Secrets of the Amish Diary by Rachael Phillips 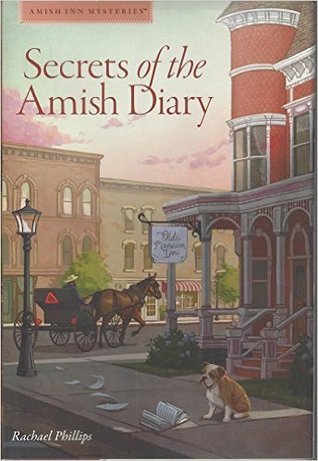 First Line:  "A new life as an innkeeper...what was I thinking?"

Summary:  Liz Eckardt has recently left her job as a patent attorney at a prestigious law firm in Boston.  Liz received her recently deceased mother's diary at the reading of her will.  In it she learned that her mother was raised Amish.  This was news to her.  Abigail, Liz's mother, left Pleasant Creek, Indiana as a teenager.  Now, Liz has purchased Olde Mansion Inn in the quaint town of Pleasant Creek.  She is hoping that by becoming part of the community she can learn more about her mother's family.

Liz is immediately welcomed, or you might say "bowled over", by a group of ladies that call themselves the Material Girls.  Two of them have run a fabric shop in Olde Mansion Inn for decades.  They were forced to close the shop when the former owner moved out and put the Inn up for sale.  Now that Liz has purchased the Inn they are ready to move back in and pay her rent.  At first Liz is hesitant to let them in.  But they seem friendly enough and are planning to pay rent.  That income sure would be helpful while Liz is building the Inn's reputation.

Among the first guests at the Inn is a man named Clarence Peabody. Mr. Peabody seems to be angry at the world.  He is extremely grumpy and very particular about many things.  At breakfast the first morning, one of the female guests tries to engage him in conversation by telling him a joke.  It was a joke about the Amish.  Rather than laughing, he mutters some angry words about "if you knew the Amish like I do" and storms out of the Inn.  That is the last any of them see of Clarence Peabody.  Later that evening two police officers arrive at the Inn asking questions about Mr. Peabody.  They inform Liz that he has been found dead in the lake near the Inn.  Mr. Peabody was not a pleasant man, but did he anger someone enough that they would murder him?

My thoughts:  First of all, the physical copy of this book is lovely.  It is hardcover with a dust jacket and has a ribbon marker sewn into the spine of the book to mark your place.  The art on the front cover makes me want to find out what's inside.

At first, the Material Girls seemed a bit over the top as they barged in on Liz.  But, before long, I saw that there was really substance to them and they were truly welcoming Liz to town.

"But the colorful group of women in the other room had extended eager hands across the empty space in her heart.  Back in Boston, her intimate friendships had taken years to establish.  She'd never been truly close to Matt, her ex-boyfriend, despite their extended history.  Yet within a few hours, these wacky but wonderful Indiana quilters had made her feel like a valued part of their group.  They had made her feel at home."

There are really two mysteries in the story.  One is the story of Liz's mother and why she left her family and the Amish way of life.  The other is the mystery of who killed Mr. Peabody.

Liz spends time doing research to find out about her mother's family.  That is more difficult than she expected it to be because it appears that her mom changed her name.

The police arrest a young Amish boy for the murder of Mr. Peabody.  He happens to be engaged to a young lady that is working for Liz at the Inn.  Liz doesn't believe he is capable of murder, but all the evidence is pointing to him.  Liz begins to ask questions, which is also difficult because she is new to town and not Amish.  However, one of the women that sews with the Material Girls is the mother of the boy arrested for the murder.  Liz can only imagine what it must be like to have your son arrested.  She decides to visit Miriam to let her know she doesn't believe her son committed the murder and offer her help.  Miriam truly appreciates her visit and the two become friends.

I really enjoyed the inside look at Amish life in the story.  Liz attends a barn raising and an Amish wedding.  We get a real feel for what that would be like.

In the end the mysteries are solved and friendships are deepened.  I look forward to reading the next book in this series.