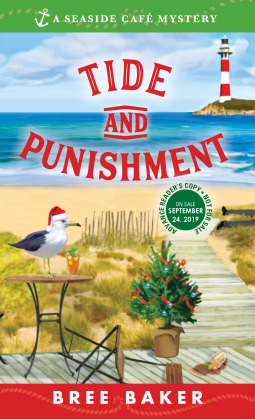 First Lines:  "'Merry Christmas,' I called to a pair of newly arriving guests.  'Welcome to Sun, Sand, and Tea.'  I rushed to shut the door against a wave of icy air and fought a head-to-toe shiver."

Summary:  It's just a few weeks before Christmas and the town of Charm, North Carolina has experienced a snow storm.  This is unusual for them and it is making travel difficult.  Everly Swan, owner of Sun, Sand and Tea is hosting a Christmas party and has invited the whole town.  Despite the snow and cold, many come to sample the delicious treats Everly has prepared.  Aunt Fran and Aunt Clara are there to help serve.  Aunt Fran also plans to announce that she will be running for mayor next fall.

Everly is surprised to see Mayor Dunfree and his wife arrive.  Aunt Fran is downright livid and suspects that he heard she was going to announce her intention to run for mayor and has come to crash the party.  Sure enough, when Clara and Fran greet the mayor he mentions he intends to make an announcement tonight.  Fran takes this as her cue to make her announcement soon.  Just as she has finished the announcement, Mayor Dunfree jumps up, clapping aggressively and begins a speech with "I commend your bravery,...".  He goes on to say some things about Fran that at first seem kind, but are really meant to point out that she is not experienced enough for the position.  He then continues by making his announcement to run for re-election, extolling his own virtues.  As he is speaking, Fran slips outside for some air.

As the guests begin to leave, Everly realizes she hasn't seen Fran in a while.  Not seeing her in the cafe, she steps outside to look for her.  Just as she does, she hears a scream and recognizes it as her aunt.  When she finds her she is bent down holding one of the garden gnomes painted by Clara.  It is broken and Everly soon realizes that it was used to hit Mayor Dunfree in the head.  He is lying nearby, dead.  Everything is pointing to Fran as the murderer, but Everly knows her aunt didn't do it.  Will they be able to discover the real murderer before Fran is arrested?

My thoughts:  I really enjoy the characters in this series and it has been fun to watch them grow.  Everly and her aunts share a strong bond that really comes through in this story.  The aunts are very close and both love Everly and are very willing to help her out even though they have their own shop to run.  As the evidence pointing to Fran as the killer continues to mount, you can feel the pain that Everly is feeling.  She is a very kind, giving person who loves to help others and can hardly stand to see someone she loves suffering.

Detective Grady Hays is back as well.  He and Everly continue to get to know one another as they work "together" on solving this murder.  Grady continues to urge Everly not to get involved, but as she begins asking questions around town, she makes the killer angry.  There are some tense moments as the killer's anger escalates and more people are threatened.

There are several new characters in this story as well.  Some are just visiting for the holidays and others live in the area, but Everly has just met them.  They add interest and I hope to see them in future books.

This killer was cunning and used several things to throw the police off.  There really weren't any clues pointing to the culprit, so I was not sure of the killer until Everly was.

An added bonus was the Christmas season.  This lent a festive air to an otherwise difficult situation.  There was a message of hope that prevailed throughout the story.  This book could be read as a stand alone, but I wouldn't recommend it as you would miss out on the growth and development of the characters.  This was an enjoyable read full of mystery, suspense and holiday cheer.