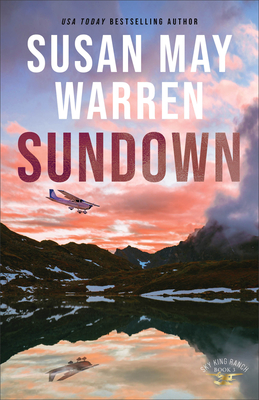 First Line: "Colt Kingston was in worse shape than he thought."

Summary:  Taylor Price has been helping out at Sky King Ranch while she recovers from the events that led to a plane crash.  In fact, she helped nurse Delta Force operator, Colt Kingston back to health after he was beaten to within an inch of his life by terrorists.  Now that Colt is on the mend, Taylor is ready to talk about what led the plane to crash.  The problem is her story is hard to believe.  It involves the Russian Mafia, a kidnapping, her attempts to crash the plane and her survival of the crash. But, when they locate the downed plane, everything Taylor has said proves to be true.  And if it is true, Taylor's life and the lives of many other people are in danger.  As Taylor goes into hiding, Colt, with the help of his brothers and their connections, set out on a mission to eliminate the threat.

My thoughts:  In this final book in the Sky King Ranch trilogy, Susan May Warren has given her readers another hard-to-put-down story.

Colt Kingston, ex-Delta Force operator, has been living out of a duffle bag for ten years.  After an altercation with one of his brothers, he has not wanted to return to the ranch in Alaska.  But, after being severely injured by terrorists in Nigeria, he has no where else to go.  Of the three Kingston brothers, Colt is the one who seems the most fearless.  He is always first to enter the fray and often takes chances that others wouldn't.  Some think this is because Colt doesn't value his life and is being reckless.  Colt doesn't see it that way or does he?  He definitely has some things to work through and he does just that in this story.

Taylor Price is a a doctor of infectious diseases and a medical scientist who is trying to create a treatment for a deadly virus.  That is why she was kidnapped.  Someone wanted to stop her work so that they could use the deadly virus as a weapon.  Taylor is brave and smart, but she doesn't know who she can trust.  She suspects there is no one she can trust. Taylor also has some things to work through, but first she has to save the world.

Every time I read a book by Susan May Warren, I find myself being so thankful for the men and women who daily protect our country from threats.  She gives me a deeper understanding of the costs of serving in this way.  But she also highlights the reality that each of us is created with gifts and talents by God for a specific purpose.  In this story, Colt is seen by some as being reckless.  But he has saved so many lives by his actions.  God has given him the ability to take risks that others won't.  We need people like that.  On the other hand, Taylor is not someone who regularly takes physical risks, but she daily examines terrifying diseases and works hard to figure out how to stop them.  She is not afraid to step into the middle of a situation that has left someone injured.  We also need people like that.

In the middle of all of that, there is romance blossoming between Colt and Taylor.  At times, it felt like the romance was bogging the story down.  But, that was a minor thing.

Overall, this was a great conclusion to the Sky King Ranch trilogy.  There were several loose ends tied up.  I will be sad to say good-bye to these characters, but if I know Susan May Warren, some of these characters will make appearances in future books.  I look forward to seeing what is next.

"Tae sat on the deck of her tiny cabin that overlooked the lake on Kingston property, the mountains tracing their outline against the magnificent blue sky.  The sun shone through wispy clouds, and the scent of wildflowers layered the air."

"'You don't have to control every moment, plan every step.  Maybe you just say yes to the doors God opens.'"

"'The role of a soldier isn't to ask why, or even determine the course of the fight.  Our job is to just say yes.'"

"'People sleep peaceably in their beds at night only because rough men stand ready to do violence on their behalf."' George Orwell