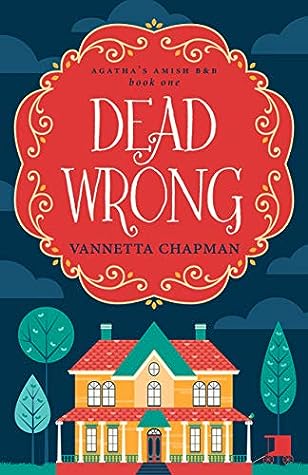 Summary:  Agatha Lapp recently relocated to Texas to take over a Bed and Breakfast her brother and his wife left behind when they were killed in an accident.  It is mid-summer and every one of her rooms and cabins are booked.  Agatha tends to most of the cooking and cleaning herself.  One afternoon as she is making the rounds of the cabins to freshen them up, she discovers the body of Russell Dixon near his cabin.  In her panic, she runs to the home of retired Detective Tony Varga, her closest neighbor.

As the police begin to investigate the death, it is ruled a homicide and Agatha is at the top of the suspect list. She found the victim and had access to his cabin, but what about motive.  Tony is not convinced that Agatha committed the murder.  In fact, he is sure she didn't commit the murder.  But Lieutenant Bannister is ready to make an arrest.  Tony and Agatha set out to discover the real murderer before Agatha ends up in jail.

My thoughts:  Whenever Vannetta Chapman comes out with a new book, I tend to read it.  Somehow, this series slipped under my radar.  She has thoroughly researched the Amish lifestyle and written about it in many books.  She also writes a great mystery.  This series combines the two with the main character being an Amish widow.

Agatha Lapp's younger brother and his wife moved to Texas and purchased some land near the Guadalupe River to realize their dream of owning a Bed and Breakfast.  Several Amish had settled in the area, so it seemed like a good place to put down roots.  Unfortunately, the couple was riding in a buggy that was hit by a car and they were killed instantly.  The didn't have children, so Agatha is their closest relative.  She feels it is her duty to honor her brother by continuing his dream of running a Bed and Breakfast.

Tony Vargas retired from the police force when his wife was ill.  He has removed himself from the world since his wife passed away.  He just can't seem to move on.  However, when Agatha comes to him for help after discovering the body of Russell Dixon, he picks up his role of detective like he never left it.  He feels like he has finally come alive again.

The guests at the B&B are an interesting mix of Amish and English, several who seem to be there under coincidental circumstances.  Agatha always assumes there must be a logical explanation for strange behavior, while Tony is more skeptical.  Really it is Tony who does most of the investigation.  Because of that, this book feel more like a police procedural than a cozy mystery and I mean that in a good way.  Tony always knows his place and reminds others that he is no longer employed by the police department.  But, as another character points out to him,

"Yet a job is so much more than what you're paid to do at any given time."

"And you, Mr. Vargas.  Your job is to find the truth and bring those who have strayed to justice."

I liked that perspective.

The mystery is a good one with plenty of suspects and connections between suspects to keep the reader on her toes. Agatha steps out of her comfort zone a couple of times, doing things she would never have considered doing and wondering if they were okay.  This lent some levity and suspense to the story.

I really enjoyed this mystery and the cast of characters.  I am excited to see there is a second book in the series.

Email ThisBlogThis!Share to TwitterShare to FacebookShare to Pinterest
Labels: 52 Books in 52 weeks, Christian fiction, Cozy mystery, Cruisin' thru the Cozies 2022, read in 2022