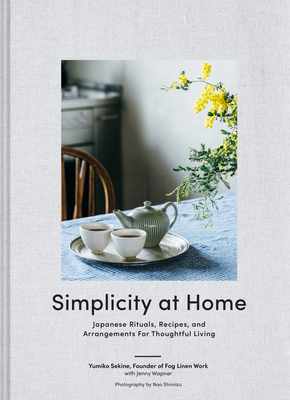 First Lines: "Several years ago, my friend Stephanie came to Tokyo from New York and stayed at our house for a few days.  After her visit, she told me how different my life was from what she expected."

Summary:  Yumiko Sekine is the founder of Fog Linen Work, a home goods brand that focuses on linen housewares and clothing.  She wrote this book to give readers a glimpse into the way Japanese people really live.  It is common in Japan to have a lifestyle and aesthetic of simplicity along with a mixture of Japanese and Western influences.

The book is organized by season.  Each section includes thoughts on decorating, organizing, rituals, food preparation, simplifying and other things.

My thoughts:  I first heard about Yumiko Sekine in an online article.  She and her partner had recently built a home in Tokyo.  The article contained pictures of the home and mentioned that she had written a book that was to be released soon.  I was intrigued and requested the book from the library.  I am so glad I did!

The book contains many beautiful pictures of Yumiko's home, her shop and Tokyo.  The book begins with a section called "My Life with Linen" where Yumiko tells some of her history and how she became interested in linen.  The book is then separated into seasons.  Each section begins with the author's reflections on that particular season followed by recipes or instructions for completing a project. Some of the projects include: what to do with old linen sheets, repairing ceramic dishes, creating a wreath, or making bath salts.  Also included are photos of things around the author's home to give the reader examples of the what the author is describing.

The photographs were gorgeous and would have made a beautiful book by themselves.  However, I enjoyed getting to know the author through the stories she told.  She briefly tells about her family and life growing up in a city in northern Japan.  She has some interesting ancestors who contributed to the person she has become. I also have a better understanding of what Tokyo is like in each season.

I recommend this book to anyone interested in home decor, organization, Japanese traditions, homekeeping or just looking at beautiful pictures.

*Link to the article I originally read:

The Japanese Literature Challenge can be found at Dolce Bellezza.