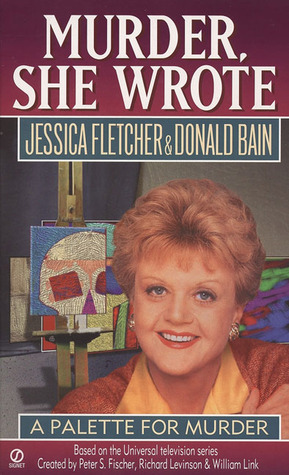 First Lines: "'Why does it matter?' 'It matters because good writing always matters,' I said, allowing an involuntary sigh of frustration to escape my lips. "

Summary:  After a difficult struggle with her latest manuscript and the challenge of teaching a class for young aspiring writers, Jessica is ready for a vacation.  Her publisher, Vaughan Buckley, and his wife have invited her to spend time with them in the Hamptons.  Jessica plans to spend the time reading, relaxing, enjoy the views and taking an art class.  The Hamptons is filled with artists and art galleries, so it seems like the perfect place to take an art class.  Jessica is a little embarrassed about her abilities as an artist and doesn't want anyone to notice her, so she dresses in a disguise when she attends the class.  The instruction includes drawing the naked human form of both a male and a female.  Unfortunately, the female model collapses while posing for the class.  She seems to have had a heart attack.  This seems odd to Jessica considering she is a young woman.  Word gets out quickly that the famous mystery writer was attending the class where the model died.  And to top it off, someone stole her drawing of the nude male model and has sold it to the local newspaper. Since she was in the room when the model died, she wants to find out more about her.  Who was she? Why was she modeling?  Where is her family?  As she begins to ask questions, she finds that not many people are willing to answer.  There seems to be more to the story of this model's death.  Did she die of natural causes or is something more sinister going on?

My thoughts:  It is always fun to accompany Jessica on her travels.  This time they take her to the Hamptons, the playground of the rich and famous in the summer months.  I have heard of this area, but know very little about it.  Here is what Google says:

The Hamptons, on eastern Long Island's South Fork, is a string of seaside communities known as a summer destination for affluent New York City residents. It’s marked by long stretches of beach and an interior of farmland, towns and villages with 18th-century shingle buildings and estates hidden behind tall boxwood hedges. East Hampton is home to high-end restaurants, bars and designer boutiques.

It sounds like a beautiful place.  Unfortunately for Jessica, her vacation doesn't end up being a relaxing time.  However, Vaughn and his wife, Olga keep her busy with dinners at many of the restaurants in the area.  One of the things I always appreciate about Jessica is her ability to mingle with people from every walk of life.  She is not overly impressed with fame or fortune, but can carry on an interesting conversation with anyone.  Also, she is not afraid to say no when she needs some time to herself.

The mystery contained an interesting look at the art world, including the difficulty of becoming known in the field, fraud, greed and manipulation.  This was a case where the death seemed straight forward.  The coroner confirmed that the model died of a heart attack.  That should be the end of the story.  However, something just seemed off to Jessica, so she started to ask questions.  She also got in touch with the Chief of Police and worked with him on the case.  And in the end, it was the police who solved the mystery with Jessica not far behind.

This was a thoroughly enjoyable read and a great addition to the series.

Email ThisBlogThis!Share to TwitterShare to FacebookShare to Pinterest
Labels: 52 Books in 52 weeks, Cozy mystery, read in 2021