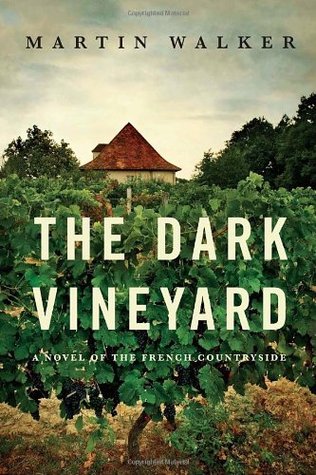 First Line: "The distant howl of the siren atop the mairie broke the stillness of the French summer night."

Summary:  Bruno is called to the scene of a fire at a research station for genetically modified crops on the outskirts of town.  The fire chief smells gasoline, which tells him the fire was no accident.  Bruno is aware of a group of fervent environmentalists in the area and immediately suspects them.  However, things get more complicated when an American businessman is looking to buy property in the area.  He is a winemaker who sees opportunity in St. Denis.   Would he have reason to set the fire?  Then there is the young woman who works at the wine shop who is newly arrived from Canada.  She seems to know a lot about grapes and winemaking.  Bruno has many things to sort through before he gets to the bottom of this mystery.

My thoughts: The best part of this series is the location.  The beauty of the French countryside comes across on every page.  Not to mention the delicious food that is described in enough detail to make your mouth water.  One of the highlights is when Bruno invites a small group of friends to his home for dinner.  Each course is described in mouth-watering detail along with some information for those of us who aren't French and need a bit of explanation about the more obscure items on the menu.

The reader also gets a look into a vendange - a grape picking party.  The owner of the vineyard invites the entire town to come and help pick grapes and then feeds them a delicious lunch.  I learned quite a bit about this process.

There is a lot to like about Bruno, too.  He is an excellent police officer, but more importantly, he cares deeply about the people in his little commune of St. Denis.  He is always a friend first, even when he is dealing with a criminal.  That is not to say that he lets anyone get away with anything, he just treats them with kindness and respect.  This often causes confusion in some of his colleagues.  They can't understand why he would go to the trouble.  That is just the kind of guy Bruno is.

The mystery is complicated and gets more complicated before it is all sorted out.  The mayor and the Police Nationale get involved and each is looking out for their own interests.  Bruno likes to do things by the book, so he is a good mediator when things get out of control.

This was an enjoyable read, with interesting characters set in a beautiful location.

"Bruno would love to be as calm and self-confident as he had taught himself to seem, and to be even a fraction as wise and patient as he sought to appear."

"'If we were in California I would not be working in a vineyard,' Bruno said.  'Unless a friend asked me to help. And then I would follow his rules, or hers, for cutting the grapes.  Here, I follow Joe's rules.  So should we all.'"