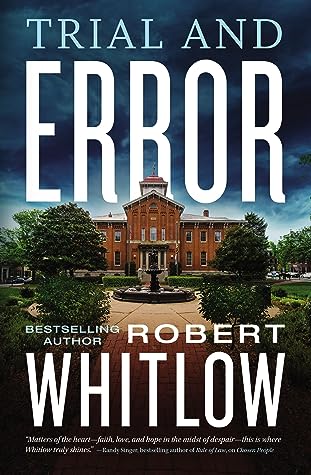 Summary:  Blair "Buddy" Smith has been searching for his daughter for seventeen years.  Days after she was born, his girlfriend left town and took the baby with her.  She never said goodbye or tried to contact Buddy.  Since that time Buddy has become a lawyer with a soft spot for cases involving missing children.

Gracie Blaylock is the first female Clerk of Court in Milton County, a position she was elected to.  In her free time she coaches a girls softball league.  Gracie and Buddy have known one another since high school and their paths often cross in their work lives.  When a member of the softball team goes missing, Gracie knows Buddy will be able to help.  As the days drag on and the girl is still missing, a detective from the police force becomes involved.  The detective, along with Gracie and Buddy follow several leads, fearing the girl may be involved with drugs and prostitution.  Just as they are about to give up a new clue surfaces.  Will they be able to rescue the girl before it is too late?

My thoughts:  Robert Whitlow is a must read for me.  He is a practicing lawyer who writes fiction. This gives him special insight into the practice of law.  However, his books don't get bogged down with legal details.  He has the ability to create unique, interesting characters who have some involvement in the field of law.  This is definitely true in Trial and Error.

Gracie is a woman who stands up for what she believes is right.  She doesn't hesitate to encourage and support others.  This is especially seen in her love for the girls on the softball team.  She played the sport herself and is able to coach the girls in technique and attitude.  She has a lot of responsibility as Clerk of Court and is well-respected by judges and members of the community.

Buddy is dealing with issues of abandonment and grief.  However, he has not let these things cause him to be stuck.  He went on with his life the best he could after his girlfriend left town, but he has never stopped searching for her and their daughter.  His father's nickname was Rascal and he lived up to it.  Keeping up appearances was important to him and he didn't like the idea of his son getting married so young.  When Buddy's girlfriend left town, Rascal thought it was for the best.  In his mind a marriage between them would ruin any chance of his son making a name for himself.  Buddy and his father didn't see eye to eye.

While Buddy and Gracie were great characters, my favorite was Beatrice, Buddy's mom.  She has been a  widow for several years since Buddy's father passed away.  She loves to grow flowers, read books and fix food for her son when he stops by.  She is involved in her church and the community and is always ready with a listening ear. She is a woman of strong faith and fervent prayer.

The mystery of the missing girl and Buddy's continual search for his daughter drew me in.  The involvement of the detective added an extra layer of depth to the search.  Clues were revealed slowly and many times lead to a dead end.  This caused me to want to keep reading to find more clues.

One of the major themes in the story is that of faith and the role it plays in our daily lives.  I appreciated how the author worked this out in different ways in the characters.  Gracie and Beatrice had a strong faith, while Buddy and some of the other characters didn't.  When difficult circumstances entered their lives, the characters handled them realistically.

I also enjoyed the taste of small town Georgia.  The summer heat, gallons of sweet tea, and the sprawling front porches all gave me a feel for the area.  The sense of community was strong.

This is a stand alone novel that involves characters with depth and interest, a good mystery and a sense of faith and community.  If this sounds appealing to you, I recommend you give it a try.

"She loved everything about the softball field. The green grass, the brown infield, and the blue sky, the smell of a top-quality leather glove, the orderliness of the white lines that framed the field of play.  It was a controlled world where the rules were clear and results easy to quantify."

"Buddy followed his mother into the kitchen.  The spacious room had the most natural light of any part of the house. Black-and-white tile squares covered the floor.  The wooden cabinets were white, and there was a round antique farm table in one corner.  Neatly stacked on the table were newspapers, books and different types of magazines.  Beatrice always kept a pitcher of freshly brewed iced tea in the refrigerator.  She filled a cut crystal glass and positioned three lemon wedges on the rim."

Email ThisBlogThis!Share to TwitterShare to FacebookShare to Pinterest
Labels: Christian fiction, read in 2021