Book Review: The Iliad by Homer 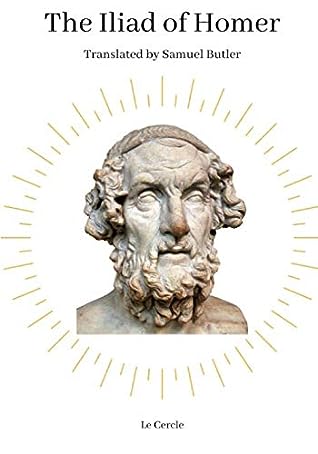 First Lines: "Sing, O Goddess, the anger of Achilles, son of Peleus,  that brought countless ills upon the Achaeans.  Many a brave soul did it send hurrying down to Hades, and many a hero did it yield a prey to dogs and vultures, for so were the counsels of Zeus fulfilled from the day on which the son of Atreus, king of men, and great Achilles first fell out with one another."

Summary:  The epic story of war between the Trojans and the Achaeans, involving gods and men.  The Iliad takes place during the tenth year of the Trojan War and begins with an episode involving a man who would not free the daughter of a priest of Apollo.

Agamemmon is forced to give her up, but in retaliation takes from Achilles the lovely Briseis.  And so, war goes on between Agamemmon and Achilles.  There are tales of battles, adventure and other goings on during the final year of the war.

My thoughts:  This is my first time reading The Iliad.  I have read a couple of retellings over the years, but never original.  One of the categories in The Literary Life 19 in 2021 Reading Challenge is an Ancient Greek or Roman work, so the timing was right to read it.  I am so glad I did.  It is such a great tale full of acts of valor and heroism.  Also full of very descriptive battle scenes.  The way the tales are told is reminiscent of the way stories are told in the Bible.

For example; "Socus had turned in flight, but as he did so, the spear struck him in the back midway between the shoulders and went right through his chest. He fell heavily to the ground and Odysseus vaunted over him saying; 'O Socus, son of Hippasus, tamer of horses, death has been too quick for you and you have not escaped him."

The telling is descriptive in a matter-of-fact way.  The reader is not told what we should think about the people or events, rather the story is played out and the reader may make his own judgement.

Something that stood out to me was the way parents were involved in the lives of their grown sons and daughters.   Especially mothers and sons.  One situation in particular was when Patroclus, friend of Achilles is killed.  Achilles mourns deeply and his mother hears from her home and goes to him.  She comforts and helps him.  She also mourns with him and for him because she realizes that in his anger he will pursue Hector and will be killed in the battle.  She is the daughter of a god and is able to help him by getting him new armor.  But, she cannot save him from being killed.

I also enjoyed the use of similes -

"And now as a band of reapers mow swathes of wheat or barley upon a rich man's land, and the sheaves fall thick before them, even so did the Trojans and Achaeans fall upon one another;..."

"As a lion fastens on the fawns of a hind and crushes them in his great jaws, robbing them of their tender life while he is on his way back to his lair - the hind can do nothing for them even she be close by, for she is in an agony of fear, and flies through the thick forest, sweating, and at her utmost speed before the mighty monster - so, no man of the Trojans could help Isus and Antiphus, for they were themselves flying in panic before the Argives."

"As when the west wind hustles the clouds of the white south and beats them down with the fierceness of its fury - the waves of the sea roll high, and the spray is flung aloft in the rage of the wandering wind - even so thick were the heads of them that fell by the hand of Hector."

"As when a cloud goes up into heaven from Olympus, rising out of a clear sky when Zeus is brewing a gale - even with such panic-stricken rout did the Trojans now fly,..."

The Iliad is not hard to read, however I will admit I found my mind wandering at times.  I listened to most of it, but did read some as well.  I discovered Librivox, which contains recordings of books in the public domain.  The Iliad is divided into 24 books or chapters and each book is a separate recording read by a different person.  I chose to do it this way because I took several months to finish the book. I did read some chapters, but mostly listened.

If you have never read the Iliad, I encourage you to give it a try.