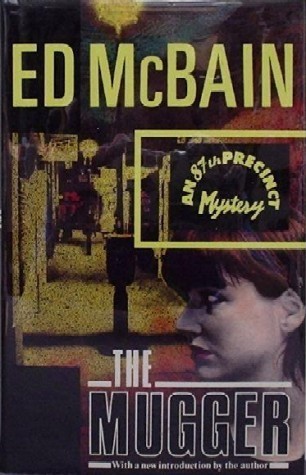 First Lines: "Katherine Ellio sat in a hard, wooden chair in the Detective Squad Room of the 87th Precinct.  The early-afternoon sunlight, burnished by autumn, tarnished as a Spanish coin, filtered through the long grilled windows, shadowing her face with a meshed-square pattern."

Summary:  There has been a rash of muggings on the streets of the 87th Precinct.  So far the only description they have of the mugger is that he wears sunglasses and just before leaving the scene, he bows and says, "Clifford thanks you".

Bert Kling is anxious to get back to work.  He has been off for several weeks after having been shot in the shoulder.  Frankly, he's bored.  So, when a friend of his asks for a favor, Burt agrees.  The friend wants Burt to come to his house and meet his wife and agree to talk to his wife's teenage sister.  The wife fears she is involved with some unsavory people, but the girl keeps to herself and doesn't want to talk.  As Burt talks to the girl, he gets the feeling she is hiding something, but he isn't able to learn anything new.

When a seventeen-year-old girl is found dead at the bottom of a cliff a few days later, Burt is saddened to learn it is the sister of his friend.  A pair of broken sunglasses are found near the body which leads the investigators to think this was done by their mugger.  However, there is not much evidence to go on.

Burt has only been back to work for a few days when the murder happens and he is not a detective, he is a patrolman.  But, he feels somewhat responsible for the girl's death, wishing he would have pushed a little harder to get her to talk.  So he begins to poke around and ask questions. After being reprimanded by the captain, he promises to stay out of it.  But, he can't help the work that he has already done and the way his mind keeps working on it.  Will the precinct be able to get this mugger off the streets before he kills again?

My thoughts:  Last year my husband and I watched several seasons of Hill Street Blues, the famous cop show from the '80's. We both have memories of the show being on TV when we were growing up.  We enjoyed watching the show and loved the characters.  When I learned that it was inspired by Ed McBain's 87th Precinct novels, I wanted to read one. This book is the second in the series.  From what I understand the first book, Cop Hater, introduces the characters at the precinct.  I could tell I had missed something, but it wasn't too difficult to follow what was happening.

The book is very similar to the show in that there is usually one main crime case that they are working on per show. In this case it was the mugging, but there were side stories relating to the personal lives of the characters and other crimes that needed to be handled in the midst of the main investigation.  There weren't any of the characters that I loved from reading this book, but I could see how you might become attached to them after a few books.

This book gives a insider's view of a police department in the heart of New York in the 1950's.  There are lots of derogatory comments, plenty of language and the use of some unconventional ways of  getting information from criminals. The author's descriptions of the streets and businesses in the precinct were vivid.

The mystery was a good one.  The reader wasn't given all the clues in order to solve it, but I found myself turning back pages to see if I missed something.  We were told that Burt tucked something into the back of his mind for use later and I was trying to guess what it was based on what he had been doing.  This was fun and kept me extra alert for any clues.  I was completely taken by surprise when it was solved.

While I am glad I satisfied my curiosity by reading this book, I don't necessarily feel the need to read any more in the series.  If you enjoy police procedurals, this one is a classic.

Email ThisBlogThis!Share to TwitterShare to FacebookShare to Pinterest
Labels: Calendar of Crime 2021, Mystery, read in 2021