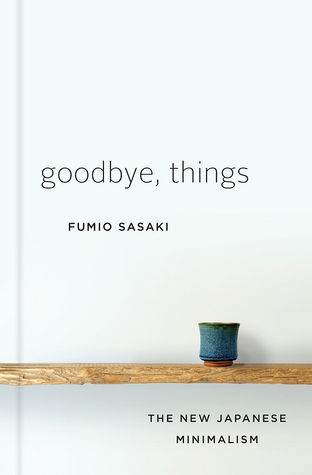 First Lines: "There's happiness in having less.  That's why it's time to say good-bye to all our extra things."

Summary:  Fumio Sasaki was just a regular guy.  He had a good job, a nice apartment and the money to buy the things he thought were supposed to make him happy.  He loved to collect books, CD's DVD's, vintage cameras, knickknacks and other things he thought made him an interesting person.  The problem was he wasn't happy, didn't have much interest in anything and felt stuck.

When he came across the concept of reducing his possessions to just the minimal essentials, he was intrigued.  As he looked around his cluttered apartment, he realized that most of the things he had accumulated weren't adding value to his life.  He went from having too much stuff, to having only the things he truly needed.  What he didn't expect was to be changed in the process.  As he let go of possessions, he was able to see more clearly what he really wanted in life.

In Goodbye, Things, Sasaki shares his personal experience with clutter and what his life is like after removing it.  He also gives tips on how to minimize and the benefits he has found by living with less.

My thoughts:   I became interested in the simple living movement over twenty-five years ago.  It was during the time before our first son was born.  At the time my husband and I both worked.  However, with the impending birth of our first child, we were considering whether we could make it on only one income.  I remember going to the library and discovering a section about frugal living and nearby were books about living simply.  We read voraciously.  Those books and ideas changed our lives.  I left my job and stayed home with our son.  And we continued to pursue a lifestyle of simplicity and frugality.

Simple living and frugality are not necessarily the same thing, however, they often cross paths.  So do simple living and minimalism.  The idea of making your life simpler by reducing your possessions makes sense to me.  However, it is a constant battle.  Things just seem to find their way into our home.  So, I like to remind myself of the benefits of having fewer possessions.  I tend to read anything and everything I come across on this topic.  I discovered this book on a visit to my library.

I enjoyed reading about Sasaki's life before and after getting rid of many of his possessions.  Something that was unique about this book was that rather than focusing on the physical details of getting rid of things, it dealt more with our mindset about our things.  For example, the first tip he offers is "Discard the preconception that you can't discard your things."  He goes on to say,

"There's no such thing as a person whose nature won't allow him or her to discard their things.  We only think we're unable to part with our possessions.  'Learned helplessness' is a term used in psychology that can explain what's happening here. Though we have the ability to get rid of things, we've given up trying because we've experienced a number of failures."

Something else unique about the book was that it began with photographs.  There were pictures of Sasaki's apartment before and after minimizing his things, as well as the homes of others who have reduced their possessions.  Right off the bat you can see that minimalism looks different for each person.  He is also quick to admit that there is no one right way to be a minimalist, but instead it will look different for each person because each of us needs to become aware of what is truly important to us.

"For a minimalist, the objective isn't to reduce, it's to eliminate distractions so they can focus on the things that are truly important.  Minimalism is just the beginning.  It's a tool. Once you've gone ahead and minimized, it's time to find out what those important things are."

Even after having read so widely on this topic, I found encouragement to continue to live as simply as possible.  I enjoyed the unique perspectives offered in this book. If you are interested in learning more about reducing you possessions, give this book a try.

Email ThisBlogThis!Share to TwitterShare to FacebookShare to Pinterest
Labels: non-fiction, read in 2021