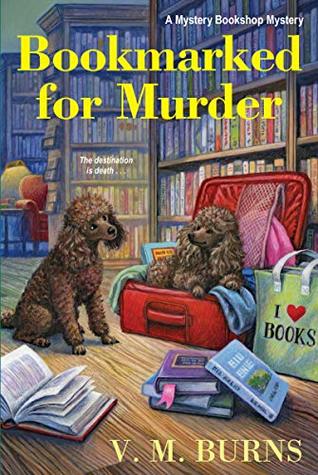 First Line: "'Samantha Marie Washington!' It was never good when my grandmother included my middle name."

Summary:  Sam and the ladies from the Shady Acres Retirement Village have taken a bus trip to Chicago.  As they return to the bus for the ride back to Michigan, they discover that the bus driver has had an emergency and a new driver is being located.  When everyone finally gets back on the bus, Irma discovers her new friend, Max, slumped over in his seat.  Unfortunately, Max does not respond when Irma tries to wake him.

It is not immediately apparent how Max died.  There are no obvious wounds.  After a medical examination it is determined that he was murdered.  Nana Jo, Sam's grandmother, begs her to figure out who did this.  As the bus trip was for residents of Shady Acres, she assumes it must be a resident who murdered Max.

Sam and her grandmother's group of friends set out to question each person on the bus hoping to learn something that will lead them to the killer.  It turns out Max was a famous author who wrote conspiracy theory books.  He was working on a book about the murder of Robert Kennedy.  Did he discover something in his research that led to his murder?

My thoughts:  I always enjoy catching up with Sam and her friends in North Harbor, Michigan.  Nana Jo, Sam's grandmother, and her friends are such a quirky bunch of characters and they take center stage in this installment.

The mystery was unique and unfolded slowly.  It is determined that Max didn't die of natural causes, but the cause of death is not revealed until halfway through the book. The timing was right though, because there was a lot to figure out about Max before the cause of death made much difference.  Sam and the ladies meet daily to hash out what they have learned.  Each of them is assigned to question several people from the bus.  This can be tricky and often not much is learned.  When a second murder occurs and then an attempted murder, the ladies have to step up their game.  Detective Pitt is involved but only because Sam asks him to be.  The original murder didn't happen in his jurisdiction, but Sam realizes he will be helpful to the case.  He takes some convincing, but does get involved especially after the second murder.  When all is finally revealed, the reader realizes that most of the clues were there all along.

A unique aspect of this series is that Sam is writing a mystery novel.  Throughout the story, Sam will take time to work on her novel and the reader is privy to what she writes.  The story in Sam's novel was  just as intriguing as the main storyline.

Sam's two standard poodles, Oreo and Snickers, play a larger role in this book than most of the others. They don't play a part in the mystery, but have a larger presence in Sam's life.  We learn that they are getting older and how this is affecting Sam.

Sam's relationship with Frank makes some progress and they spend a lovely New Year's Eve together. i enjoy this budding relationship and the care they have for one another.  Even though Sam's husband passed away before she moved to North Harbor, she has quite a family around her.  I love the part her grandma, her sister and her nephews play in her daily life.  The sense of community and family is one of the things I like most about this series.

If you enjoy cozy mysteries with a strong sense of community and some quirky characters, give this series a try.