Book Review: My Family and Other Animals by Gerald Durrell 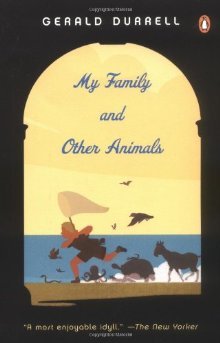 First Lines: "This is the story of a five-year sojourn that I am my family made on the Greek island of Corfu.  It was originally intended to be a mildly nostalgic account of the natural history of the island, but I made a grave mistake by introducing my family into the book in the first few pages."

Summary:  When Gerald Durrell was ten, he and his two older brothers, one older sister and their mother, moved from England to the island of Corfu.  This book chronicles their five years there, the interesting people they met, the beauty of the island and, of course, the animals that Gerry found so intriguing.

My thoughts:  Gerald Durrell's style of writing makes this book easy to read.  He has a way with words that makes you laugh.

I love his portrayal of his siblings.  His older brother, Larry, tends to over exaggerate most things.  He does most things big.  Whether it is his reaction to something or the number of people he invites to a party, the bigger the better.  Leslie is more down to earth and logical.  He prefers to spend his time with a gun in his hand hunting for prey.  Margo can be overly dramatic.  She prefers to spend her time reading magazines or sunbathing wearing very little clothing.

Gerald's mother is a saint.  She tolerates with patience each of the quirks of her children and especially a house full of unlikely pets.  I tolerated my children's quirks as well, but having a house full of scorpions, snakes and large birds would have driven me crazy.  While she is tolerant, she is also not afraid to tell it like it is.  When the children are arguing, she tells them that they argue about the stupidest things.

I loved the descriptions of the island and the beautiful things that grow there.  The animal life and Gerry's interest in them was fascinating as well.  I'll admit there were a few situations that had me squirming though.

If you like to visit exotic places from your armchair and meet interesting people and animals, I recommend this book.

"Upstairs Margo was in a state of semi-nudity, splashing disinfectant over herself in quantities, and Mother spent an exhausting afternoon being forced to examine her at intervals for the symptoms of the diseases which Margo felt sure she was hatching."

"'A dreadful journey!' Mother agreed.  'When we came out of the cinema I thought we were going to get a car, but no, he hustled us into a cab, and a very smelly one at that.  Really, I think he must be mental to try and come all that way in a cab.  Anyway, it took us hours and hours, because the poor horse was tired, and I was sitting there trying to be polite, dying to scratch myself, and longing for a drink.  All the fool could do was sit there grinning at Margo and singing Turkish love songs.  I could have cheerfully hit him.'"

"So Dodo settled in, and almost immediately showed faults in her make-up which caused us more trouble than all the other dogs put together.  To begin with she had a weak hind-leg, and at any time during the day or night her hip joint was liable to come out of its socket, for no apparent reason.  Dodo, who was no stoic, would greet this catastrophe with a series of piercing shrieks that worked up to a crescendo of such quivering intensity that it was unbearable.  Strangely enough, her leg never seemed to worry her when she went out for walks, or gambolled with elephantine enthusiasm after a ball on the veranda.  But invariably in the evening when the family were all sitting quietly, absorbed in writing or reading or knitting, Dodo's leg would suddenly leap out of its socket and she would roll on her back and utter a scream that would make everybody jump and lose control of whatever they were doing."

Email ThisBlogThis!Share to TwitterShare to FacebookShare to Pinterest
Labels: 52 Books in 52 weeks, Literary Life 19 for 2021, memoir, non-fiction, read in 2021