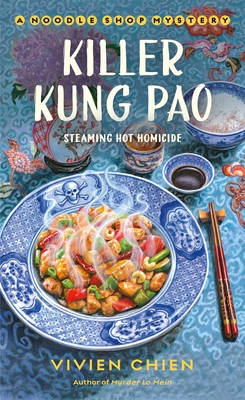 First Line: "'Lana Lee, you're the only person in this world who would choose to dye their hair gray,' my sister, Anna May said, scrutinizing the photo of a sassy model with the hair color I wanted for myself."

Summary:  As Lana Lee, manager of Ho-Lee Noodle House, is leaving her family's restaurant one evening, she is startled by a loud crunch.  When she looks in the direction of the sound, she sees that a car has just backed out of a parking spot and slammed into another car.  Unfortunately is was June Yi who backed into the other car owned by Millie Mao.  The two woman have a long standing dislike of one another. Neither one of them is known for being easy to deal with. Millie is carrying on about how she has whiplash and the two women are arguing in the parking lot.  Millie calls the police and while she is waiting for them to arrive, she calls everyone she knows to tell them what June did.  When the police arrive, the women continue to argue.

The next day Lana has an appointment at Asian Accents, just a few doors down from her family's restaurant in Asia Village.  She is going to try a new color in her hair.  As she is waiting for her stylist, June Yi arrives at the salon.  The previous day June had read Lana the riot act about hanging around the scene of the accident.  For some reason June has never liked Lana and it shows when she sees her at the salon.  As Lana is waiting for the bleach to work in her hair, she sees Millie arrive at the salon.  Before long the two women begin arguing.  Lana's hairdresser asks them to stop and things quiet down.  Before the hairdresser can rinse the bleach out of Lana's hair the electricity goes out.  As one of the salon employees makes her way to the breaker box, she discovers Millie Mao dead in the manicure chair, apparently electrocuted.

My thoughts:  The rivalry between June and Millie is pretty intense.  June is just a nasty person and has been unkind to Lana for as long as she can remember. She is not sure why June took a dislike to her, but the feeling is mutual.  Millie is looking for any excuse to get back at June and not just for backing into her car.  The rivalry has spanned many years.  So, it was a relief when Millie was removed from the situation.

I enjoy the characters in this series.  Lana continues to grow in each book which is something I appreciate.  She does like to dye her hair strange colors, but it works for her.  She handles the management of her family's restaurant well and is always on top of things.  We learn a little more about her sister, Anna May, in this installment. It was good to see their relationship grow and we were left with a bit of a cliffhanger regarding something in Anna May's life.

There are bits and pieces of Asian culture that come through in each book.  The majority of the characters are Asian and many of the older ones spent some of their lives in the Asian country they are from.  There are lots of little things to pick up.

The mystery was good.  It was a locked room mystery as it had to be someone in the salon that killed Millie.  There were plenty of suspects.  Lana hadn't planned to get involved but more than one person came to her and asked her to.  Not to mention, several people were more than willing to give their opinion on matters along with bits of information.  Surprisingly, Detective Trudeau doesn't discourage her involvement.

This was another great addition to the Noodle Shop Mysteries series.