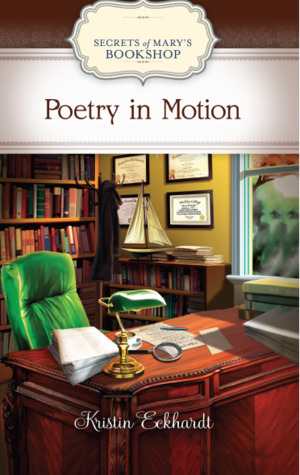 First Line: "Spring was in the air."

Summary:  When Mary discovers a piece of yellowed notepaper at the bottom of the book collection bin, she wonders if it fell out of one of the books.  As she investigates it, she discovers it is a handwritten poem.  It is titled "Pike's Peak" and signed "Katherine Lee Bates, 1893".

Mary takes the paper to a local man who has some experience with historical documents.  The man believes it could be the original from the feel of the paper and the smell of the ink.  But, he promises to send it out to be tested.  While in his office, Mary meets his assistant, a young man who happens to be the nephew of her pastor.  After an interesting conversation with the young man, Mary leaves.

The next morning she receives a frantic call from the document man claiming that he can't find the poem and his assistant hasn't shown up for work.  Has the poem been misplaced?  Or did the assistant steal it and leave town?

My thoughts:  I am always amazed when I read a book from this series that each book is written by a different author.  They do such an excellent job of remaining true to the characters.

The premise of this one was interesting with the poem written by Katherine Lee Bates.  I enjoyed learning a little about the history of that poem.

There are plenty of things to unwind and discover.  Mary is careful not to judge others before she has all the facts.  There were lots of twists and turns in the mystery and a little suspense before it wraps up.

It was an added bonus that this story takes place in the spring.  It is rare that I coordinate reading a book with the same season that we are in.  It gave me extra appreciation for this lovely time of year!

"Mary Fisher stood at the open window of her bookshop and breathed in the late afternoon breeze.          It had a fresh, earthy scent that made her eager to dig into the backyard garden of the house she             shared with her sister."

This was an enjoyable addition to the series.  It can be read as a stand alone, but there is much to be gained by starting at the beginning of the series.

Just a note, Goodreads lists this as the seventh book in the series, but Guideposts and my records indicate it is the eighth.

"'Do you remember how much Gram used to love thunderstorms like this? Betty asked with a reminiscent smile.  'I sure do,' Mary replied.  'Gram always said it was so glorious to feel just a smidgen of God's power shaking us up for a bit.'"

Email ThisBlogThis!Share to TwitterShare to FacebookShare to Pinterest
Labels: Christian fiction, Cozy mystery, Cruisin' thru the Cozies 2021, read in 2021