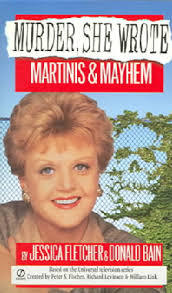 First Line:  "People who don't know Maine suffer from the delusion that it never gets hot there."

Summary:  Jessica is leaving Maine to spend a week in San Francisco publicizing her newest book.  Maine is having a heatwave and she is looking forward to the cooler weather in San Francisco.  As part of her tour, her publicist has arranged for her to visit a Women's Correctional Facility where she will give a talk on journal writing.  Jessica is feeling a bit apprehensive, but hopes she can offer some helpful information to the woman.  Most of the women seem uninterested, but there is one woman who asks some pointed questions.  When Jessica returns to her hotel later that day she discovers a journal in her handbag.  The journal was placed there by the interested woman at the Correctional Facility.  It turns out she is in prison for murdering her husband.  There was quite a bit of debate around the trial, as many thought she was innocent.  As Jessica reads the journal, she also becomes convinced the woman is innocent.  She is only in town for a short time, will she be able to find evidence to prove the woman's innocence?

My thoughts:  Spending time with Jessica Fletcher is always a treat.  This time was especially enjoyable because the book begins in Cabot Cove, so we get a taste of Maine before she heads off on her adventure.

The bulk of the book takes place in San Francisco.  The author did an amazing job of giving the reader a feel for San Francisco.  At one point Jessica walks across the Golden Gate Bridge.  As she does so, she describes for the reader what she is seeing.  This helped me feel like I was there.  She also spends time at Fisherman's Wharf and some other landmarks in the area.  The author gives good descriptions as well as some history about some of the places she visits.

While in San Francisco, Jessica learns that her friend George Sutherland is in town attending a conference.  It turns out that the woman in prison, Kimberly, grew up in Britain.  When she had been sent to prison, several of her family members visited George at Scotland Yard and asked him to help investigate.  George is also convinced she is innocent.  George and Jessica work together to investigate.  Along the way they discover that maybe they are interested in becoming more than friends.  Time will tell.

The mystery was unique in that the police believed they already had the killer.  So they were not much help in the investigation.  However, Jessica made an agreement with one police officer who wanted her to read is book manuscript  and give him advice.  She agreed to read it and give her opinion in exchange for a look at some files.  There is not too much suspense, but as Jessica keeps digging, things finally begin to add up.

This was an enjoyable addition to the series.  I am reading the series in order and look forward to Jessica's next adventure.